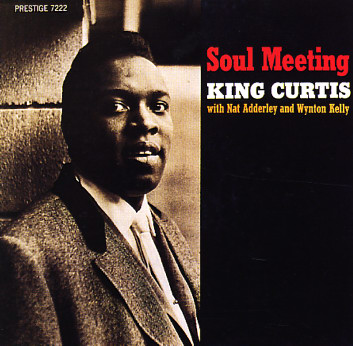 Rare early King Curtis jazz session – cut in the years before he settled down to his tight short soul instrumental recordings for Atlantic. The record is very much in the Prestige soul jazz style of the early 60s – and King's set up nicely in a group that features Nat Adderley, Wynton Kelly, Sam Jones, and Belton Evans. In a way, Curtis' sax can't really hold it together for these longer tracks as well as he can on shorter soul instrumentals – but the record's got a good rhythm section, and it holds together well enough as an easy grooving session. Titles include "Soul Meeting", "Lazy Soul", "All The Way", and "Do You Have Soul Now?"  © 1996-2021, Dusty Groove, Inc.
(Mono yellow and black label NJ pressing with RVG etch.)