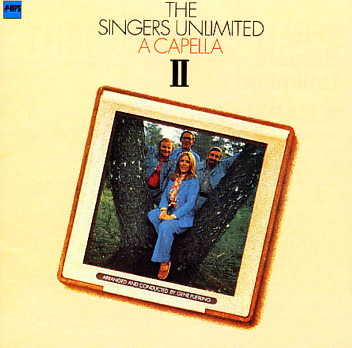 Some of the best-remembered work of this legendary vocal group – a sublime session of unaccompanied vocals, done with no other instrumentation alongside the warm harmonies of the quartet! The sound here is really amazing – simple, elegant, but filled with undeniable magic – and far far different than any other hokey acapella work of the time. The acapella sound here has no doo wop or vocalese references – and is instead a warm, wonderful pillow of sound – forged through the unique arrangements of leader Gene Puerling, and carried off beautifully by all members of the group. Titles include a great version of Gilbert O'Sullivan's "Clair" – plus the tunes "Girl Talk", "I Don't Know Where I Stand", "Nature Boy", and "Lost In The Stars".  © 1996-2023, Dusty Groove, Inc.
(US MPS pressing. Cover has light wear.)