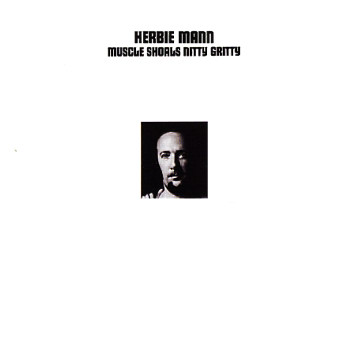 Herbie Man gets nitty and gritty at the Muscle Shoals Studios – bringing his funky flute to the southern powerhouse of sound, and hitting some of his most soulful grooves of the time! The approach here is really great – definitely cast in the southern soul mode that was associated with Muscle Shoals, but also done with the looseness of a jazz record – so that the sound's a fair bit different than similar projects coming out of the scene at the time. Most tracks are long and flowing – with lots of sweet electric elements that include vibes from Roy Ayers, guitar from Eddie Hinton, and keyboards from Barry Beckett. Wayne Jackson and Andrew Love slide in on horns – but Herbie's flute is still the main solo element, and it gets plenty of space to stretch out with some great trippy grooves! Titles include Edwin Birdsong's "Can You Dig It?", plus Sonny Sharrock's "Blind Willy", and Herbie's own "Panama Red's Panama Hat" and "Claudia Pie".  © 1996-2022, Dusty Groove, Inc.
(Record club pressing with PR suffix, in the original die-cut cover, with light ring wear and some aging.)

African Marketplace
Elektra, 1980. Very Good+
LP...$13.99
One of Dollar Brand's more ambitious albums – featuring a larger group of players than usual, working through some compositions that have as much life and spirit as might be implied by the title! The group includes Brand on keyboards, conga, and soprano sax – plus work by Carlos Ward ... LP, Vinyl record album