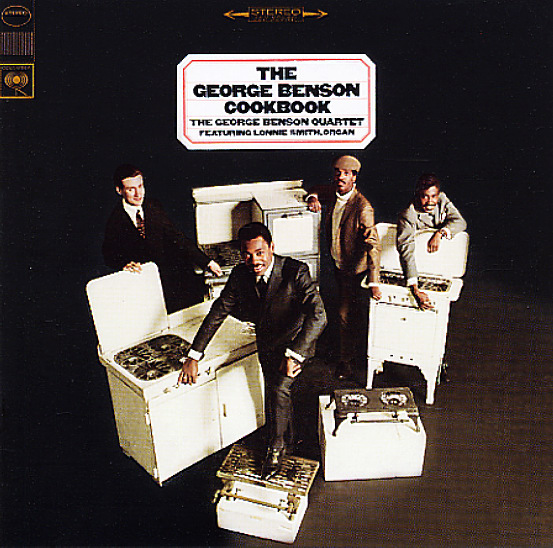 A great little record from the days before George Benson had totally hit his smooth jazz sound of the 70s, and was being pushed by Columbia as a hard wailing soul jazz leader! The record features his classic quartet with Lonnie Smith on organ – grooving away hard hard hard, sometimes even harder than George! Benson's fresh off his work with the Jack McDuff quartet, and his style's nice and lean, with some good riffs, and a very tight approach to the strings. Titles include "The Cooker", "Benny's Back", "Bossa Rocka", and "Benson's Rider".  © 1996-2022, Dusty Groove, Inc.
(70s stereo pressing. Cover has some ring and edge wear, name and notes in marker- labels too.)

Drum Suite
Columbia, 1956/1957. Very Good+
LP...$49.99
An incredible early experimental album from Art Blakey – one of the first to feature him in expanded percussion format! Side one of the album features the extended "Drum Suite" – a set of 3 tracks ("The Sacrifice", "Cubano Chant", and "Oscalypso") ... LP, Vinyl record album

Shakti With John McLaughlin
Columbia, 1976. Very Good+
LP...$2.99
Great post-Mahavishnu work from guitarist John McLaughlin – the debut of his excellent Shakti combo, a group who mixed Indian music with some tighter fusion moments! The style here is a lot leaner than some of McLaughlin's previous experiments – a small group lineup with violin from L ... LP, Vinyl record album

Manhattan Wildlife Refuge (photo cover)
Columbia, 1974. Near Mint-
LP...$4.99
A pretty compelling record from trombonist Bill Watrous – one of those players you always figure for a straight guy, but who always manages to throw in a curve ball at the right moment! This one's got Bill working with a large group in kind of a mixed electric big band style – and the ... LP, Vinyl record album