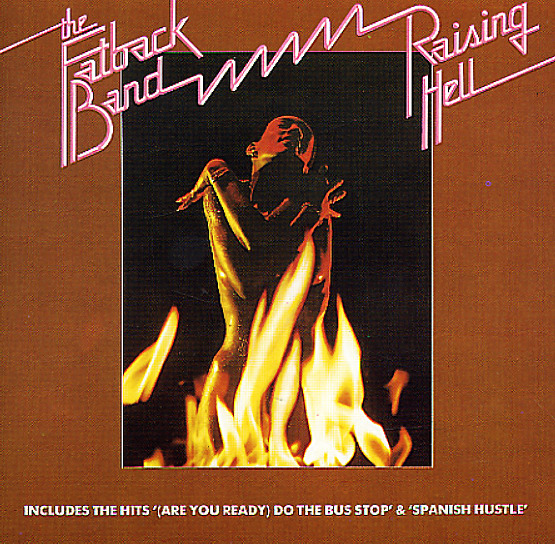 Also available
Fatback Band — Raising Hell ... LP 16.99
Raising Hell indeed – as Fatback were really burning up the dancefloor by the time of this set, well earning the demonic sexy image on the cover! All the sharp funk elements of the group's roots are still in place, but they're also given more focus for the rising club scene of the east coast underground of the mid 70s – not in a slick disco way, but with a style that shows just how much the tight instrumentation of these earlier funk groups had an impact on the direction of soul in the late 70s! The set's brimming over with great funky disco numbers – and includes the group's two classics "Do The Bus Stop" and "Spanish Hustle" – plus the excellent numbers "Party Time", and "Groovy Kind Of Day".  © 1996-2023, Dusty Groove, Inc.

Yum Yum
Event/Southbound (UK), 1975. New Copy
CD...$8.99 14.99 (LP...$22.99)
Yum Yum indeed – because the groove on here is pretty darn tasty! Fatback are definitely shaking off the rougher edges of their funkiest years on this set, but the sound is still plenty great – a jamming dancefloor groove that's still filled with plenty of tight live instrumentation, ... CD

Keep On Steppin'
Event/Southbound (UK), 1974. New Copy
CD...$8.99 14.99
Quite possibly the last really hard-hitting funk album from The Fatback Band – and although their first record on the Event label, a set that cooks every bit as hard as their first few for Perception! The style here is funky 45 soul at its best – lots of hard crackling drums, funky ... CD

Funky Music Machine
Southbound (UK), 1972. New Copy
CD...$8.99 14.99
A rare gem from Maceo Parker – the second album cut with his King's Men group in the short time he was away from James Brown in the early 70s! The set was done for the Excello southern soul label, and it's got a bit of a different groove than his work for House Of Fox with the same group ... CD