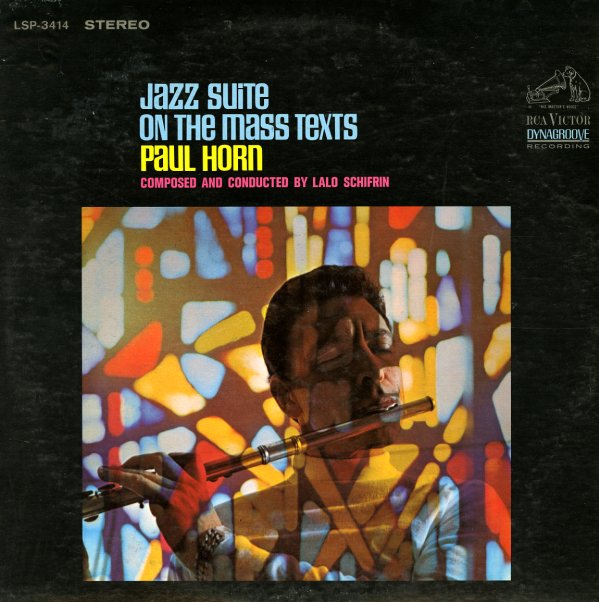 Jazz Suite On The Mass Texts

One of Paul Horn's groovier albums from the 60s – and a record that features some nice arrangements by Lalo Schifrin! As the title might make you guess, the album's kind of a "jazz mass", and replicates the Kyrie, Gloria, and Offertory progression of a regular Catholic mass. The whole thing might be pretty snoozy, but it's fortunately saved by some nice playing by Horn, and by groovy elements in Schifrin's arrangements, particularly the percussion playing of Emil Richards and Milt Holland.  © 1996-2022, Dusty Groove, Inc.
(Mono Dynagroove pressing with deep groove. A nice copy!)

Cosmic Consciousness – Paul Horn In Kashmere
Liberty, 1968. Near Mint- Gatefold
LP...$14.99
One of Paul Horn's first forays into the "world" zone, and a lot better than his later ones. He plays alto flute, and is backed by a group of 3 Indian musicians playing sitar, tabla, and tamboura. Lots of groovy flutey ragas, and the cover features a dedication to Maharishi Mahesh Yogi. ... LP, Vinyl record album

Michel Legrand Recorded Live At Jimmy's
RCA, 1975. Sealed
LP...$5.99 7.99
One of a few key efforts done by Michel Legrand for RCA in the 70s – sessions that stand out as some of his best jazz work from the decade, and which present Legrand in unfettered brilliance, both as a player and arranger! This live date still has the original compositions and sense of ... LP, Vinyl record album