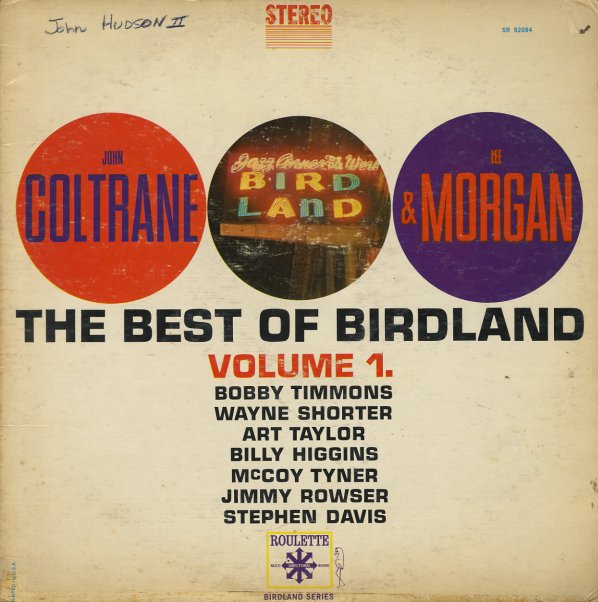 Incredible material from both John Coltrane and Lee Morgan – some of their best of the early 60s, and a record that always gets shamefully overlooked! The record features a side apiece of work by Morgan and Coltrane, each acting as the leader for a small group in perfect format. Coltrane is playing with an unusual quartet that includes McCoy Tyner, plus bassist Steven Davis and drummer Billy Higgins. Higgins' gives Coltrane a modal groove that's incredible, and Trane hits these riffs that are almost Nathan Davis-ish on tracks like "Exotica" and "One & Four". The Morgan material is a bit more straight ahead hardbop – but equally excellent – and he's got a tight tight group that features Wayne Shorter, Bobby Timmons, Jimmy Rowser, and Art Taylor. Shorter is incredible, and tracks include "Minor Strain", "Bid For Sid", and "Suspended Sentence". Killer work all-around – and a must-have LP for fans of either player!  © 1996-2021, Dusty Groove, Inc.
(Orange and pink label pressing. Cover has some light wear, some light splitting on the top seam, and a cutout hole in the corner.)

Back To Basie & The Blues
Roulette, 1963. Very Good+
LP...$3.99
A great collection of tracks from the Basie/Williams Roulette albums made in the late 50's and early 60's! LP, Vinyl record album

My Fair Lady My Way
Roulette, 1964. Very Good
LP...$4.99
A great jazzy take on this classic score – led by Richards with a hell of a swing! LP, Vinyl record album

Life Is A Many Splendored Gig
Roulette, 1958. Very Good+
LP...$9.99
Incredibly hip big band work from trumpeter Herb Pomeroy – proof that the Boston influence in the 50s was a very good force in modern jazz! The group here is large, but the sound is often quite lean – done with an open focus on the strongest soloists in the group – players who ... LP, Vinyl record album