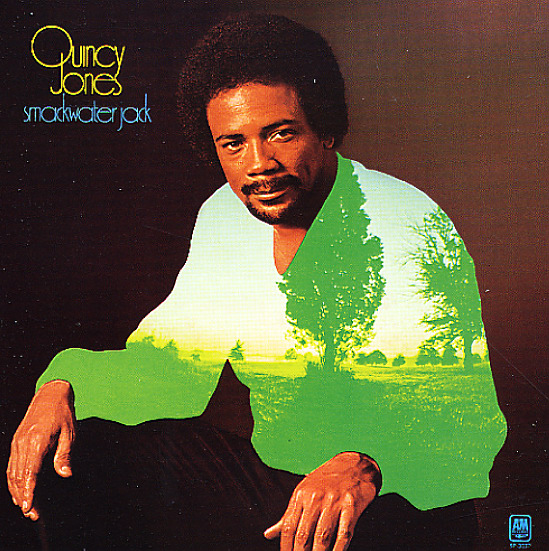 A great bit of 70s electric work from Quincy – and probably his funkiest album ever! Quincy's really stepping out here from the straighter and spacier styles of earlier records – going for more of the dirty grooves he was cutting up for soundtrack albums, and hitting notes that were a lot more fitting for the blacksploitation era. The record includes the massive funky track cut "Hikky-Burr", which was the theme to the first Bill Cosby Show, and which has a sinister groove, and some wild shouted lyrics! Also features two more great themes – "Ironside" and "The Anderson Tapes" – both of which have a cool electric sound to them, and the nice title cut, which actually features Quincy on vocals! Other tracks include "Cast Your Fate To The Wind", "What's Going On", "Brown Ballad" and more.  © 1996-2022, Dusty Groove, Inc.
(Brown label stereo pressing in the embossed cover, with light wear, a name in pen on front and back, and an unglued bottom seam held with pieces of clear tape. Labels have a name in pen.)

Birth Of A Band (The Birth Of A Band/The Great Wide World Of Quincy Jones)
Mercury/EmArcy, Late 50s. Near Mint- 2LP Gatefold
LP...$9.99 11.99
A great 80s EmArcy two-fer from Q's Mercury years! The Birth Of A Band is a very swingin', very groovy early album from Quincy – one that's clearly in the big band mode, but handled with soulful touches that really set it apart from the genre! The band is a great one all the way through ... LP, Vinyl record album

Quincy Jones Plays Hip Hits
Mercury, 1963. Near Mint-
LP...$19.99
One of Quincy Jones' best for Mercury Records in the 60s – a very groovy record that was done with a feel that's somewhere in between his Big Band Bossa album and his best 60s soundtrack work! The format is simple – Quincy picks a sweet batch of jazz semi-hits from the early 60s, plays ... LP, Vinyl record album

Quintessence
Impulse, 1961. Very Good Gatefold
LP...$14.99 (CD...$2.99)
A very soulful set of big band material from Quincy Jones – recorded during that tight early 60s period when his arrangements just couldn't fail! The album's his only session for Impulse, and it's got a slightly deeper style than his work from the time for Mercury – a bit more ... LP, Vinyl record album

Q – The Best Of Quincy Jones
A&M, Late 70s. Very Good+
LP...$5.99 7.99
An excellent set of 70s soulful fusion from Quincy – recorded during his legendary A&M years, when he was working with some of the best new singers in the soul business, like Leon Ware, Patti Austin, Luther Vandross, and James Ingram. The album leans towards the smoother soulful side of ... LP, Vinyl record album

Gula Matari
A&M, 1970. Very Good+ Gatefold
LP...$11.99 14.99
A real step forward for Quincy Jones – a record that really shows the jazzman moving into sophisticated new territory – a sound that's just right for the CTI generation! The album's got a vibe that's a bit similar to Quincy's Walking In Space album, but it's a lot deeper too – ... LP, Vinyl record album

Stonebone
CTI/A&M, 1970. Near Mint- Gatefold
LP...$24.99
A truly fantastic record, and one that's become the stuff of legend over the years – a rare CTI album that was only ever issued in Japan – and which may well be one of the coolest sessions recorded during the A&M years of the label! Trombonists JJ Johnson and Kai Winding had ... LP, Vinyl record album