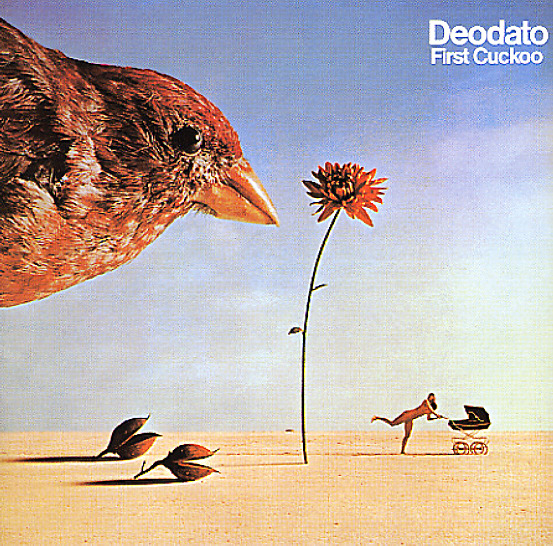 Key proof that Deodato kept on making great records after leaving CTI Records – and in a way, the kind of set that allowed him a bit more freedom to grow than some of his contemporaries! The vibe here is a bit tighter than before, but in a way that makes many numbers even funkier – played by small combos on all tunes, with players that include Hubert Laws, Steve Gadd, John Tropea, and other early 70s fusion heavyweights – all jamming with Deodato's great work on electric piano and clavinet! There's a great variety of material here, but as usual with Deodato, even familiar tunes get really transformed – in this case into soulful fusion numbers with a sound that we never would have expected! Titles include "Caravan", "Funk Yourself", "Crabwalk", "First Cuckoo", and versions of Marcos Valle's "Adam's Hotel" and Led Zep's "Black Dog"!  © 1996-2022, Dusty Groove, Inc.
(Includes MCA inner sleeve. Cover has light wear on bottom corner, but is nice overall.)

Rhapsody & Blues
MCA, 1980. Very Good+ Gatefold
LP...$4.99
The Crusaders at their late 70s smooth jazz best – completely confident in the sound of their groove, and unabashedly working in a tight studio setting on longer tracks that helped forever change the sound of mainstream funky jazz! And yes, the edges are polished down from the group's ... LP, Vinyl record album

Sonny Stitt At The DJ Lounge (80s pressing)
Chess/MCA, 1961. Near Mint-
LP...$7.99
A classic from Stitt – cut during the underground days of the early 60s, when both he and Gene Ammons seemed to be recording for just about every jazz label around, and when they both seemed to be doing an awful lot of work in Chicago. This album was done in a flurry that Jug and Stitt cut ... LP, Vinyl record album

Inherit The Wind
MCA, 1980. Near Mint- Gatefold
LP...$7.99
One of the best Crusaders-related solo projects – a soulful bit of fusion from saxophonist Wilton Felder, co-produced with his fellow Crusaders! The album's got the best sunny finish of the group's late 70s albums – traces of Latin, funk, and soul bubbling through a warm jazzy mix ... LP, Vinyl record album