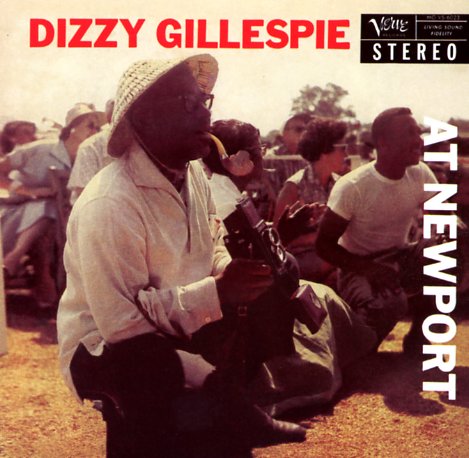 One of the best albums ever in Verve's classic set of recordings from the 1957 Newport Jazz Festival – a set that captures the Dizzy Gillespie group of the decade in top live formation! The ensemble here is plenty hip – with a young Lee Morgan joining Dizzy on trumpet, and a host of other great players who include Melba Liston and Al Grey on trombones, Benny Golson and Billy Mitchell on saxes, and rhythm from the trio of Wynton Kelly on piano, Paul West on bass, and Charlie Persip on drums! Although big, the band often had the sharper groove of a small combo – and even when hitting some older moments from Gillespie's earlier years, they still kept a modern edge in their approach – thanks to arrangements by AK Salim, Tadd Dameron, Benny Golson, Quincy Jones, and Dizzy himself. Titles include "School Days", "I Remember Clifford", "Manteca", "Dizzy's Blues", "Cool Breeze", and "Doodlin".  © 1996-2023, Dusty Groove, Inc.
(Verve stereophonic pressing with deep groove. Cover has some wear and aging, split seams, stapled corners, and a bit of clear tape with a sticker underneath.)

In The Beginning
Prestige, Late 40s/1973. Near Mint- 2LP Gatefold
LP...$19.99
Nice 2LP set that brings together a huge amount of pivotal work from the early bop years of Diz, including titles recorded for the Guild and Musicraft labels, as well as Prestige. The set's an essential one, because although you often hear references to this material, most of it was originally ... LP, Vinyl record album

Back To Back
Verve, 1959. Near Mint-
LP...$24.99
Duke Ellington makes a rare Verve appearance on this classic album – and works strongly in the mode of earlier sides recorded for the label by Johnny Hodges! There's a relaxed, small group feel going on here – one that's a bit different than some of the tighter Ellington work on ... LP, Vinyl record album

Oscar Peterson Plays Porgy & Bess
Verve, 1959. Very Good
LP...$9.99
Less an interpretation of Porgy & Bess than an extrapolation of its themes – one that lets the Peterson trio recraft the music into their own! Given that the Porgy & Bess theme had been explored heavily by many other jazz albums of the late 50s – due to the release of the film ... LP, Vinyl record album

Blue Benson
Verve/Polydor, 1968/1976. Very Good+
LP...$7.99
A sweet 70s collection of late 60s work from George Benson – tracks recorded in 1968 for Verve, originally from the albums Giblet Gravy and Goodies! The set list here really does a great job of picking out the best numbers – the kind of clean, lean tunes that were pushing Benson from ... LP, Vinyl record album