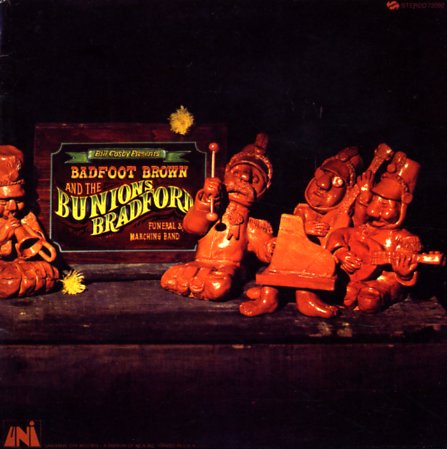 A funky masterpiece from Bill Cosby – hardly the sort of record you might expect from all of his years on mainstream TV! This set was cut back when Bill was a much hipper cat on the LA scene – and it was the start of a brief all-instrumental run with his Badfoot Brown ensemble – a group who's not named in the notes on the record, but who offer up some seriously funky grooves! Bill supposedly plays keyboards himself – some really mad electric piano that's often repetitive, cyclical, and really hypnotic – a tripped-out style that's more funk than jazz, and which is easily one of the best parts of the record. But the rhythms are great too – equally hypnotic, and build up from bass, organ, guitar, and this whomping sort of drum part – echoing strongly in the background and really bringing a spooky feel to the set. Side one includes the amazing "Martin's Funeral" – sampled famously by Tribe Called Quest, and a 15 minute jam that's inspired by the funeral of Martin Luther King. Side two features "Hybish Shybish", an even longer track that's sort of an improvised jazz game – and which features tripped-out instrumental trading that's simply amazing. The whole record is really mindblowing – a messed-up jam session that's well worth the legend that's been built up around it over the years – and we're hard-pressed to think of another album like it! And as a special bonus, the package features these really long notes written by Bill Cosby himself – words that are as unusual as the music, and a side of him that's hardly been shown again.  © 1996-2021, Dusty Groove, Inc.
(Includes the Uni inner sleeve. Cover has a cutout hole, light wear, and a small sticker inside the gatefold.)

He's All I've Got
Unlimited Gold, 1976. Very Good+
LP...$9.99
Despite what was probably an easy temptation to go pop disco, Barry White and the girls here stick pretty closely to their classic 70's soul sound – the large part of which was a huge inspiration for disco in the first place. Barry's production, as always, is excellent, as is his songwriting ... LP, Vinyl record album

My Kind Of Jazz
Tangerine, Late 60s. Very Good+ Gatefold
LP...$9.99
Nice album of instrumental tracks that shows a surprisingly strong side to Ray's group of the time. The tracks are all in a jazz-based mode, and many of the titles have a groovy swingin' big band feel – especially "Senor Blues", "Zig Zag", "This Here", and " ... LP, Vinyl record album

Keep Your Soul Together
CTI, Early 70s. Very Good+ Gatefold
LP...$24.99
Freddie Hubbard at the peak of his 70s powers – and one of his finest albums of the decade! The record follows strongly in the tone that Freddie set at CTI on his mighty Red Clay and Sky Dive sets – long, drawn out tracks – done with lots of electricity in the rhythms, and a very ... LP, Vinyl record album

Cal Tjader At Grace Cathedral
Fantasy, 1976. Very Good+
LP...$9.99
One of the fantastic electric Cal Tjader sessions from the 70s – with that mixture of vibes and electric piano that made his work of the time take on an even funkier sound than before! Lonnie Hewitt's at the keyboards here – and he's got a sly, slinky groove that's totally great – ... LP, Vinyl record album