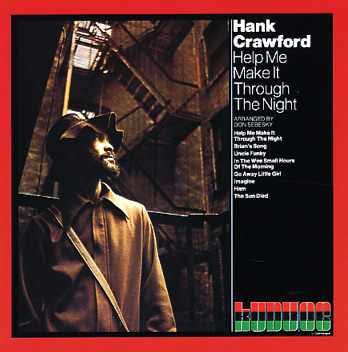 Help Me Make It Through The Night

One of Hank Crawford's first big records of the 70s – a really great set that helps him shake off some of his stock modes of the 60s and find a very different groove! A big part of the album is arranger Don Sebesky, who gives Hank a backdrop that's sophisticated and smooth, yet still pretty soulful in all the right places – a style that's almost a bit like mainstream soundtrack work of the time, but a bit more jazz focused overall. Hank's solos are right out front on most tracks – blown with that nicely pinched tone that made him a standout back in the day – and other players include Richard Tee on both organ and piano, as well as Idris Muhammad and Bernard Purdie on drums. Titles include "Uncle Funky", "Imagine", "The Sun Died", "Brian's Song", and "Ham", which was arranged by Pee Wee Ellis.  © 1996-2021, Dusty Groove, Inc.
(In fantastic shape!)

Hank Crawford's Back
Kudu, 1977. Near Mint-
LP...$8.99
Hank Crawford turns his back on the cover of this sweet little set from Kudu – but the groove itself is very upfront, strongly in the best mix of funky jazz and club the label had going down into the late 70s! Arrangements are by David Matthews, who keeps things lean and mean, even when the ... LP, Vinyl record album

Double Cross
Atlantic, 1968. Near Mint-
LP...$19.99
Hank's blowing it in that stock soulful style he used with Ray Charles – over slightly larger arrangements that feature players like Wendell Harrison, David Newman, Melvin Latiste, and Carl Lynch. Jack McDuff plays piano on "In The Heat Of The Night", and other tracks include " ... LP, Vinyl record album

Boogie To The Top
Kudu, 1977. Sealed
LP...$29.99
Classic middle period work from drummer Idris Muhammad – a set recorded after his initial run of lean funk recordings for the jazz scene – with a bit more soul in the mix, and definitely a bit of boogie in the groove! Arrangements are by David Matthews – the maestro of the soul-st ... LP, Vinyl record album

Kogun
RCA, 1974. Very Good+
LP...$7.99
Brilliantly bold work from pianist Toshiko Akiyoshi – an artist who's really coming into her own for the 70s – stepping out in a big band format that would win her a wide new audience on both sides of the Pacific! The album's one of the first to feature the ensemble co-led with husband ... LP, Vinyl record album

We All Know Who We Are
Chocolate City, 1978. Very Good+
LP...$11.99
One of our favorite Cameo albums of all time – a record that still has the group sounding plenty funky, but also maybe hitting a more sophisticated one – one that comes through perfectly on the message-oriented title track! There's a sense of compression going on here – ... LP, Vinyl record album