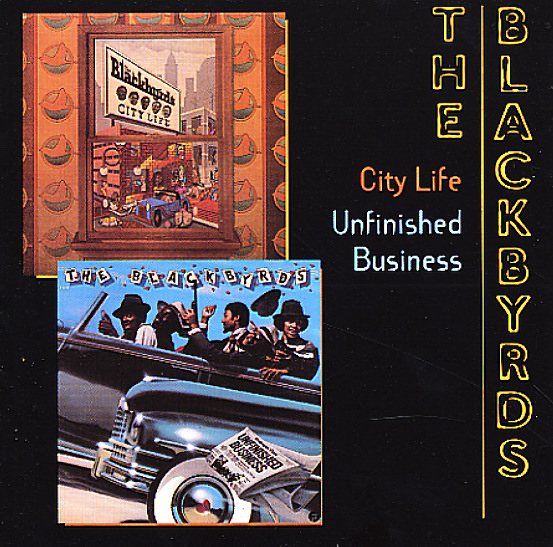 2 classics from The Blackbyrds – back to back on a single CD! City Life is a fantastic album from the legendary jazz funk combo – a bit smoother than their first, but that's the great thing about it! The record has the band getting even tighter than before – coming up with an amazing jazz-inflected funk groove that still leaves us breathless after all these years – and which is the perfect fusion of jazz and soul that was going down with the best groups in the mid 70s. The best example of this sound can be heard on the massive cut "Rock Creek Park" – which begins with a wonderful bass on the intro, a killer moogy keyboard bit, and a super-catchy chorus that goes "doin' it in the park," which you should recognize in about 30 seconds! The rest of the album is great too – and titles include the classic sample track "Love So Fine" – plus "Happy Music", "Hash and Eggs", "Thankful Bout Yourself", and "All I Ask". Unfinished Business has The Blackbyrds are at the top of their game – working in a sweet blend of jazz, funk, and soul – all produced to perfection by their mentor Donald Byrd! The groove is quite similar to some of Byrd's best from the time – a bit fuller than the first few records by The Blackbyrds, thanks to the addition of larger horns – and put together in ways that really has them soaring towards the skies on waves or righteous soul! There's vocals on most tracks, but they really take equal place next to the group's wonderful instrumentation – especially the heady keyboards of the mighty Kevin Toney, still a key member of the combo at this point. Titles include "Party Land", "In Life", "Time Is Movin", "Lady", and "You've Got That Something".  © 1996-2022, Dusty Groove, Inc.