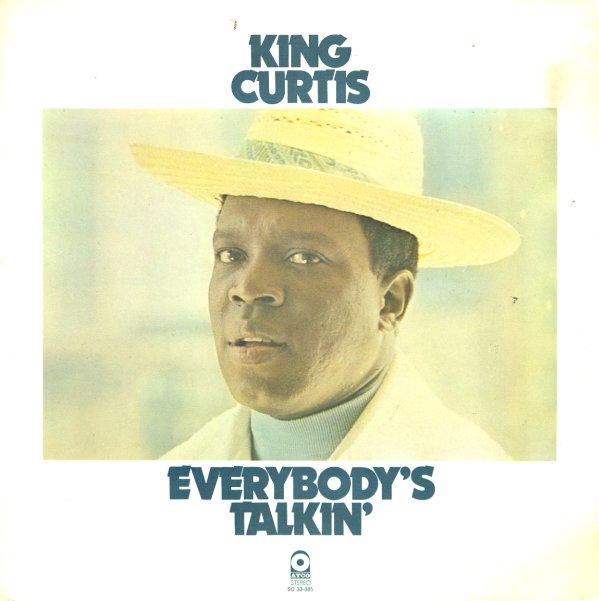 King Curtis' last album of studio work for Atlantic – pulled from a number of sessions recorded in the year before his untimely early death! The sound here is tightened up a bit from King's grooves of the 60s – done with a style that still draws on the Atlantic soul sound that Curtis helped forge in earlier years, yet which also has a good deal of 70s electric funk touches creeping into the mix – a style that we would have loved to hear more of, had King stayed on this planet long enough. Players include Richard Tee, Paul Griffin, Cornell Dupree, Bernard Purdie, and The Memphis Horns – and the titles include the usual Curtis-styled take on pop and soul tunes of the time, plus a few originals for the set. Includes a funky version of King Floyd's "Groove Me", plus the cuts "Ridin' Thumb", "Central Park", "Wet Funk", "Ridin' Thumb Jam", and "You're The One".  © 1996-2023, Dusty Groove, Inc.
(White label promo. Cover has surface wear and a trace of a sticker.)

Great King Curtis
Atlantic/Clarion, Late 50s. Very Good-
LP...$1.99
A tasty set that documents the early work of King Curtis on Atlantic – packaged here on the label's small budget imprint Clarion, in a hard to find 60s package! A number of the tracks on the set were early Atlantic singles by King, and they predate his later 60s work by a number of years ... LP, Vinyl record album

Love Man
Atco, 1969. Very Good+ Gatefold
LP...$29.99
A key posthumous release from Otis Redding – material recorded in 1967 before his untimely early death, released in 1969 to a very eager audience for work from the late soul singer! The album's a bit less classic than some of Redding's earlier Stax sides, but is still head and shoulders ... LP, Vinyl record album

Tell The Truth
Atco, 1970. Very Good
LP...$24.99
In the years after his death, when Otis Redding had approached near-deity status, Atlantic was digging through their vaults (recently swiped from Stax!) to find whatever they could to put together a record. Fortunately, most of the material they came up with was great – as you'll hear on ... LP, Vinyl record album

Dreams Of Tomorrow
Atco, 1979. Near Mint-
LP...$16.99
An overlooked gem from California soul singer Marilyn Scott – a sweetly grooving album with loads of warm modern touches – all coming together in a style that's sophisticated, yet still manages to groove – like the best later work by Marlena Shaw on Columbia! Production is by ... LP, Vinyl record album