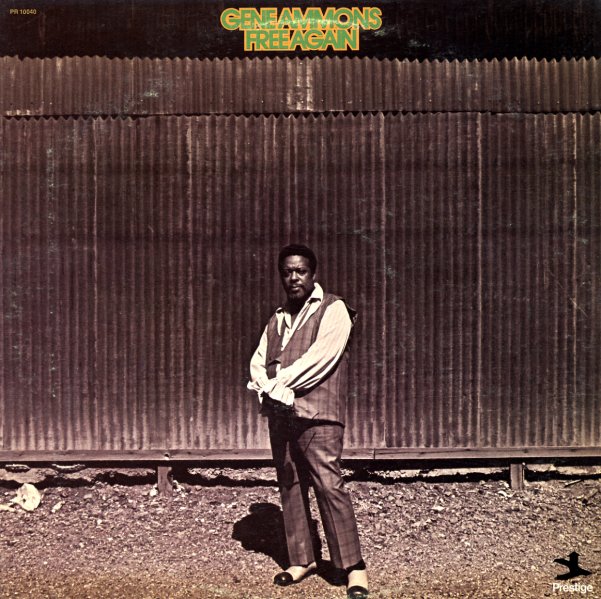 Dang! Poor Gene Ammons kept getting stuck with albums that had titles which referenced his prison time! Fortunately, the quality of this one's good enough to live past the stupid name – and the record has Gene blowing with a larger group of west coast soul jazz players, arranged by Bobby Bryant, in the style of big band funk he was using on his own work. More than a few nice moments arise – especially on the cuts "Crazy Mary", "Fru Fru", and "Jaggin".  © 1996-2022, Dusty Groove, Inc.
(Cover has a cut corner, minimal wear.)

Happy Blues (Jazz Classics Series)
Prestige, 1956. Very Good+
LP...$7.99
Gene Ammons in a mighty nice setting – working here in an open-ended jam session style that brings all his best live energy into play at the studio of Rudy Van Gelder! The set's got a crackle that really goes beyond the earlier, shorter bop recordings from Ammons – and a bit more ... LP, Vinyl record album

Blue Groove
Prestige, 1962/1982. Very Good+
LP...$9.99
A rare one by Gene Ammons – recorded in 1962 for Chess, but unissued until this obscure early 80s pressing on Prestige! The session is one of Jug's excellent early 60s sides – and is very much in the style of other work from the period. Players on the set are mostly unknown, but the ... LP, Vinyl record album

Nice An' Cool
Prestige/Moodsville, 1961. Very Good
LP...$34.99
Nice and cool, but not in a west coast way – and instead a set that's got Gene Ammons working some wonderfully soulful magic on a set of gentle ballads! The set's got a brilliant late nite sort of feel – one of those tenor albums that seems to sound even better in the space past ... LP, Vinyl record album

Boss Tenor
Prestige, 1960. Very Good
LP...$39.99
A soul jazz classic from Gene Ammons – the kind of session that easy made him "boss" on tenor – with a tone and conception that few other players could touch! The set is done in a style that's laidback, but never too loose – bouncing along in that "with conga" ... LP, Vinyl record album

Talk That Talk
Prestige/New Jazz, 1960. Very Good-
LP...$14.99
Subtle early magic from Johnny Hammond Smith – the kind of sweet organ jazz set that really set Smith apart from his contemporaries in the 60s! There's a slightly offbeat vibe here that's hard to peg, but which already marks Hammond as one of the more inventive players of his generation ... LP, Vinyl record album