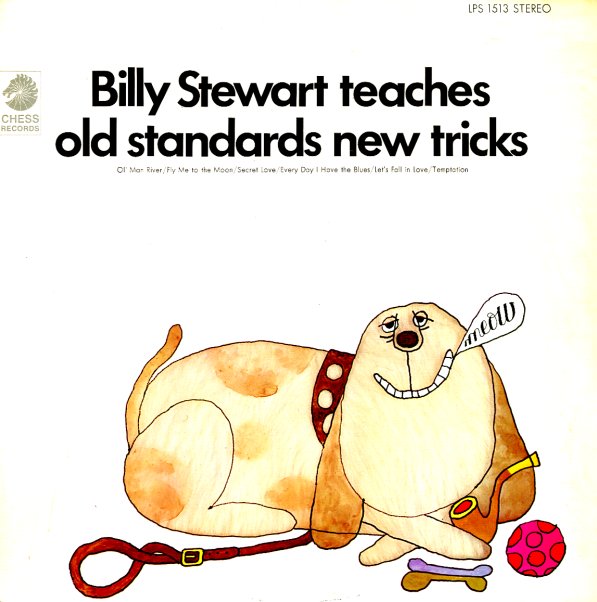 This was the follow-up LP to Billy Stewart's huge single of Gershwin's "Summertime", and it's got a similar approach of "funky soul takes on American pop music standards". "Summertime" isn't on the album, but all the tracks have a sound that falls in the same mode – with fantastic vocal pyrotechnics from Billy, and tight arrangements by Phil Wright that both groove hard, but have a sophisticated classy edge. Titles include "Temptation", "Who Can I Turn To", "Let's Fall In Love", "Exodus", "Fly Me to the Moon", and "Secret Love". Also includes a great version of "Every Day I Have the Blues", with a nice hard funky drum intro!  © 1996-2021, Dusty Groove, Inc.
(80s pressing in a light blue cover.)

Greatest Sides
Chess, 1960s/Early 70s. Near Mint-
LP...$19.99
A great collection of Billy Stewart's work for Chess, mostly a greatest hits set as the title implies, and is filled with some of Stewart's best-remembered songs – like "Secret Love", "Summertime", "I Do Love You", "Sitting In The Park", "Fat ... LP, Vinyl record album

Moonglows
Chess, Late 50s/1976. Near Mint-
LP...$7.99
70s compilation that brings together some of the best Chess doo wop sides recorded by The Moonglows – simply stunning tunes that are some of our favorite vocal group recordings of the time! The set's got one unissued track – "Sweeter Than Words" – plus titles that ... LP, Vinyl record album

Bunch Of Goodies
Chess, Late 50s. Very Good+
LP...$14.99
A great little compilation of early vocal group material on Chess Records! The set is very heavy on tracks by The Moonglows – including "Please Send Me Someone To Love", "When I'm With You", "Sincerely", "Most Of All", and "We Go Together". ... LP, Vinyl record album

On The Case
Chess, 1970. Sealed
LP...$11.99
A full-blown, very righteous offering from Chess to the political cause of Operation Breadbasket! Tenorist Ben Branch leads the large gospel-tinged group – and sax player Gene Barge produces and plays, with a style that's very much in the Chess/Checker bag of the late 60s soul era. Most ... LP, Vinyl record album