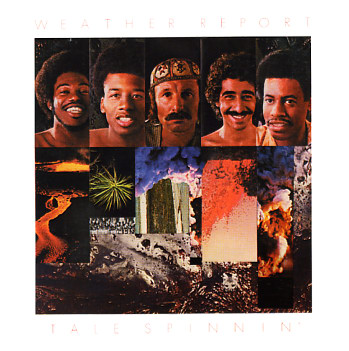 A beautiful title for a beautiful little record – one that really does have Weather Report spinning out musical tales in sound – with a free-flowing and soulful sense of energy! The groove's definitely tighter than the earlier years, but it's never slick – and Joe Zawinul handled the overall orchestrations for the record, with an approach that's often highly rhythmic, vamping, and building up nicely as the tunes roll on. There's definitely some echoes here of Wayne Shorter's love of Brazilian music – although represented in a relatively subtle way – and Ndugu Chancler's working with the group here on drums and percussion. Titles include "Man In The Green Shirt", "Lusitanos", "Badia", and "Freezing Fire".  © 1996-2021, Dusty Groove, Inc.
(Cover has ring and edge wear, discoloration from age, and initials in pen.)

Weather Report (1982)
Columbia, 1982. Near Mint-
LP...$11.99
A self-titled early 80s set from Weather Report – not to be confused with the group's debut over a decade before – and one that still has key core members Wayne Shorter, Joe Zawinul, and Jaco Pastorius in place! Shorter's reeds seem even more angular than before – really chopping ... LP, Vinyl record album

Headhunters
Columbia, 1973. Near Mint-
LP...$49.99
A seminal jazz funk session of the 70s – Herbie Hancock's legendary meeting with The Headhunters, and a killer batch of tunes that really gave the combo their name! Herbie's playing a wide range of keys here – including Fender Rhodes, clavinet, and Arp – but almost even better is ... LP, Vinyl record album

Shining Hour – Live At The Trident
Columbia, 1965. Near Mint-
LP...$11.99
An excellent live outing from pianist Denny Zeitlin – recorded at the height of his early powers! The session's got a freshly new conception to piano-based jazz – a style that resonates nicely with the best 60s work of Steve Kuhn or Keith Jarrett, sharing some of the tenderness of the ... LP, Vinyl record album

Memorable Claude Thornhill
Columbia, Early 40s. Near Mint- 2LP Gatefold
LP...$9.99
Vintage material by one of the hippest bands of its generation – including some early arrangements by Gil Evans! LP, Vinyl record album