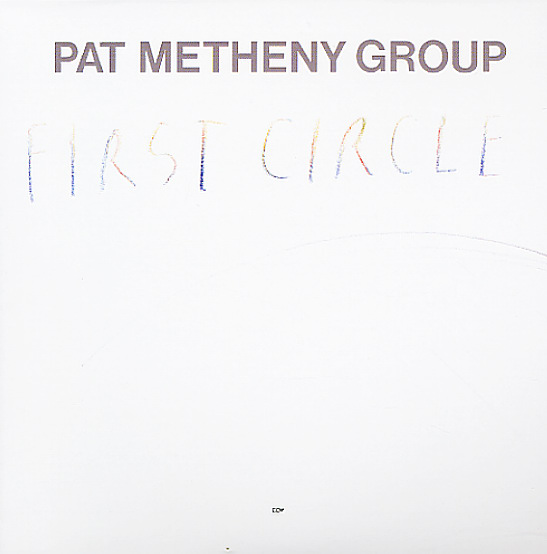 Arguably the last great album to come from the classic Pat Metheny collaboration with Lyle Mays – a record that's tightened up considerably from some of the group's earlier efforts, but which gives as its reward some wonderfully compelling tunes! Pat's still very much influenced here by a Brazilian fusion style – but he takes that approach, dismantles it, pulls out the best elements – and extrapolates them into a sound that's uniquely his own. Wordless vocals slide out on a few numbers, while guitar and keys sing alongside earthier percussion – in a style that's extremely evocative, and shows that even riding the top of his own success, Metheny was still more than willing to bring in new modes. Titles include "If I Could", "Forward March", "Yolanda, You Learn", "End Of The Game", and "Mas Alla".  © 1996-2022, Dusty Groove, Inc.
(US pressing. Cover has light wear.)

Watercolors
ECM, 1977. Near Mint-
LP...$11.99
A seminal record in the formation of the Pat Metheny sound of the 70s – a set that brings his wonderfully chromatic work on guitar into play with the piano of Lyle Mays – all at a level that's so stripped-down and spacious, you can easily hear all the genius as it unfolds! And yet the ... LP, Vinyl record album

American Garage
ECM, 1979. Very Good+
LP...$5.99 7.99
A brilliantly evocative album from Pat Metheny – one that's got a quietly epic feel, as Pat and group soar out across the American landscape in a set of tunes that subtly explore space and sound while still remaining wonderfully fluid. There's nothing forced here, and nothing too slick ... LP, Vinyl record album

Offramp
ECM, 1982. Near Mint-
LP...$14.99
A really wonderful little record from Pat Metheny – quite possibly our favorite by the man, thanks to some really inventive sounds that still resonate strongly in the groove scene today! Pat's skirting nicely here between the sound-based quality of earlier records, and some of the more fluid ... LP, Vinyl record album

First Meeting
ECM, 1980. Near Mint-
LP...$24.99
We're not sure who's meeting who first here – but the group is a great one, led by bassist Miroslav Vitous – with John Surman on soprano sax and bass clarinet and Jon Christensen on drums – plus the more ECM-unlikely Kenny Kirkland on piano! LP, Vinyl record album