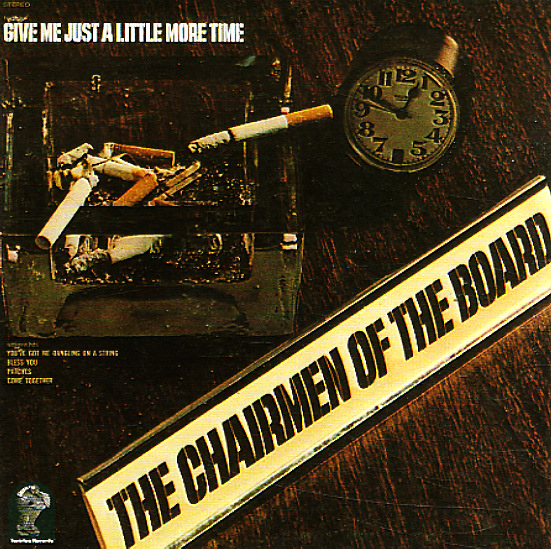 Give Me Just A Little More Time

A landmark album of 70s soul – and perhaps the most enduring full LP by this enigmatic harmony group! The vocals of General Crook alone are more than enough to win us over – some of the most distinct lead soul singing we've ever heard, pitched perfectly with the backings of the rest of the group. But the overall package is even better – righteous arrangements that really show the new Holland-Dozier-Holland energy for the 70s – more of a punch than most of Motown a few years before, and open to some headier elements that only serve to do even more with the vocals! Titles include the group's huge hit "Give Me Just A Little More Time", a totally compelling number with a scattershot beat, and some wonderful lead vocals from the always-great General Johnson – plus, their cover of Clarence Carter's "Patches" – which was a big single for them – and the tracks "Bravo Hooray", "Since The Days Of Pigtails & Fairytales", "Come Together", "You've Got Me Dangling on a String" and "Tricked & Trapped".  © 1996-2022, Dusty Groove, Inc.
(Cover has surface and edge wear, clear tape on the spine, and a name in pen. Labels have a name in pen.)

In Session
Invictus, 1971. Near Mint- Gatefold
LP...$19.99
A killer album by the Chairmen of the Board! The record's their second – and although the "In Session" title, photos on the front, and liner notes all make it appear to be a live album, it's actually a studio session, with the same great Holland-Dozier-Holland production as the ... LP, Vinyl record album

Aries
Invictus, 1972. Sealed
LP...$13.99
A rare solo effort from Danny Woods – a record cut away from Chairmen Of The Board during a stretch when the group had temporarily disbanded – and an excellent showcase for Danny's strength on his own! Woods is really wonderful here – with a proud, righteous quality that really ... LP, Vinyl record album