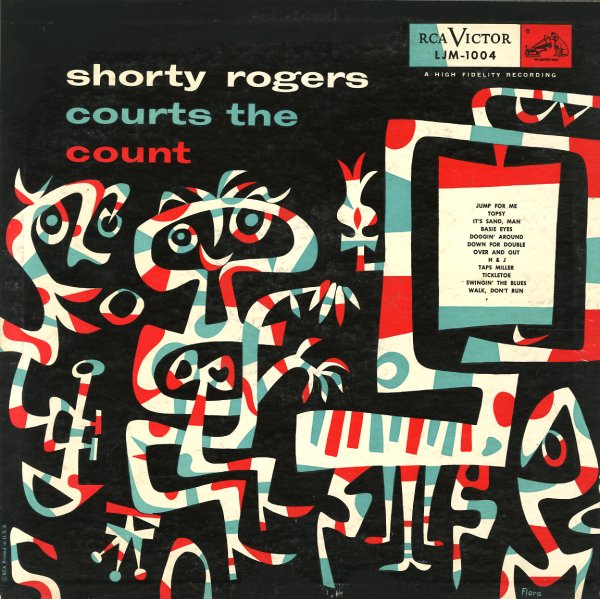 Shorty Rogers courts Count Basie – but he does so in a way that's definitely all his own! The material may have Basie roots, but the overall execution is Shorty at his early 50s best – in a way that makes the album one of his strongest for RCA at the time – and that's saying a heck of a lot, given the great run of records! The lineup is filled with well-chosen players who fall together wonderfully under Shorty's leadership – Buck Clayton, Pete Candoli, and Harry Edison on trumpets – and reed work from Jimmy Giuffre, Bob Cooper, and Bud Shank. The set swings with all the power of the Basie band, yet has all the wonderful arrangements we love from Rogers – and titles include "Basie Eyes", "Doggin Around", "Jump For Me", "Over & Out", and "Walk, Don't Run".  © 1996-2022, Dusty Groove, Inc.
(Mono black and silver label pressing with deep groove. Cover has some wear and aging, clear tape holding the seams and spine, and a vintage shop sticker in back.)

Portrait Of Shorty
RCA, 1958. Very Good+
LP...$2.99 (CD...$1.99)
Tight big band work from Shorty Rogers – cut a few years after his early LA sides for RCA, but in a very similar mode. The tracks are slightly longer than usual, and it's stunning how many players get to solo on each track Most only get a few bars, but they make more than enough with the ... LP, Vinyl record album