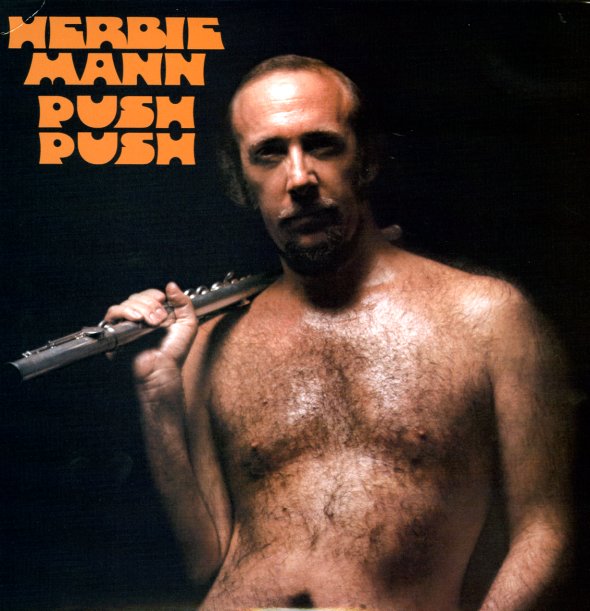 One of Herbie Mann's biggest albums – and one of his funkiest too! The cover's a bit of an off-putter – although it probably helped sell the record, back in the day – but the grooves are as rock-solid as anything that Herbie cut at the time – tight, focused, and a perfect showcase for his soulful work on flute! Tracks have a groove that's somewhat relaxed – almost a shift from the soul jazz vibe of Mann's earlier Atlantic work into some of the freer modes that were showing up in the CTI generation – and the players on the date include both Duane Allman and Cornell Dupree on guitars, Richard Tee on keyboards, Chuck Rainey on bass, Ralph MacDonald on percussion, and Bernard Purdie on drums – a player whose work here is definitely a key part of the sound! All tracks are long and slinky funky – and titles include "Push Push", "Spirit In The Dark", "What's Going On", "What'd I Say", and "Never Can Say Goodbye".  © 1996-2022, Dusty Groove, Inc.
(In the die-cut gatefold cover, with some edge wear and torn bits at the die-cut.)

Under The Sun (Arista Freedom)
Arista Freedom, 1973. Near Mint-
LP...$19.99
Chicago had the Art Ensemble of Chicago at the end of the 60s – and St Louis had the fantastic Human Arts Ensemble at the start of the 70s – a wonderfully creative jazz group who shared a lot of the same ideas of improvisation and artistic freedom as the AACM up in the Windy City! This ... LP, Vinyl record album

Rendez-Vous
EMI/Cheetah, 1983/1988. Near Mint-
LP...$7.99
Warm and mellow keyboards from the great Jorge Dalto – an obscure Japanese set from the early 80s, but one that has all the spacious grooves of his US classic from the 70s! Jorge plays a range of acoustic and electric keys here – mostly in a small group setting that features guitar ... LP, Vinyl record album