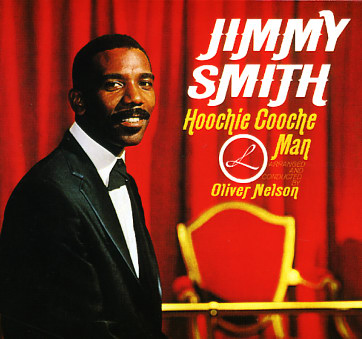 Jimmy pays tribute to an earlier generation of R&B – in a hard-wailing set of soul jazz, done with backings from the legendary Oliver Nelson! A few tracks feature vocals by Jimmy, in a rough bluesy style, and others have some harmonica by Buddy Lucas – in a raspy, hard-wailing mode that still fits in nicely with the jazzier style of the album. Jimmy's organ is right up front on most numbers – recorded with that full, dynamic sound that makes so many of his Verve albums a treasure – and the best numbers have a more contemporary 60s groove alongside the older bluesy roots. Grady Tate plays drums – surprisingly funky at times – and other players include Melba Liston and Tom McIntosh on trombones, Billy Butler on guitar, Bob Cranshaw on Fender bass, and Joe Newman on trumpet. Titles include "Hi Heel Sneakers", "TNT", "Boom Boom", "Ain't That Just Like A Woman", and "One Mint Julep".  © 1996-2022, Dusty Groove, Inc.
(Mono MGM pressing. Cover has some wear and aging, with a Can Be Played On Stereo sticker, and split seams held with clear tape.)

Who's Afraid Of Virginia Woolf?
Verve, 1964. Very Good- Gatefold
LP...$5.99 7.99
A real treasure, and a record that may well be our favorite Jimmy Smith album for Verve – a masterful meeting of his smoking Hammond work with some swingingly sophisticated arrangements by Oliver Nelson and Claus Ogerman! Both Nelson and Ogerman bring a fuller spectrum of horn work to the ... LP, Vinyl record album