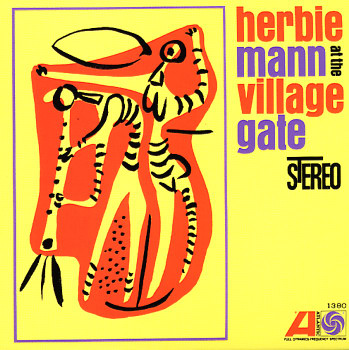 Herbie Mann's at the Village Gate – really wailing away in a set of extended numbers that not only set a whole new standard for live recording in jazz, but which also pushed forward the role of the flute in the music as well! There's a heck of a lot of soul in the grooves here – served up by a totally cooking rhythm section that includes basses from Ben Tucker and Ahmed Abdul-Malik, percussion from Chief Bey and Ray Mantilla, and drums from Rudy Collins – plus some especially great work on vibes from Haygood Hardy, sounding beautifully chromatic underneath Herbie's sharp-edged work on flute! The set features a key reading of "Comin Home Baby" that runs for over 8 minutes long – plus great long versions of "Summertime" and "It Ain't Necessarily So".  © 1996-2021, Dusty Groove, Inc.
(Red & green label Broadway pressing. Vinyl has a light click on "Comin' Home Baby".)

Stitt Plays Bird
Atlantic, 1963. Very Good
LP...$19.99
After years of staying free of comparisons with Charlie Parker, Sonny Stitt steps confidently into a set of compositions by the late, great one – sounding really wonderful in his own interpretations of these classics! The album's got the same simple and focused still as Stitt's best work on ... LP, Vinyl record album