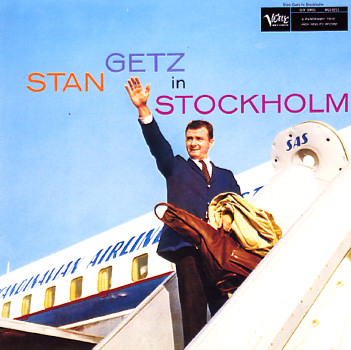 Stan Getz makes a key musical trip to Sweden – to showcase his affection for a jazz scene that had been growing strongly in the postwar years – often in directions that were similar to Stan's own sound at the time! The session is one of the first to pair Stan's tenor with a Swedish group – in this case the bass of Gunnar Johnson, drums of Anders Burman, and piano of Bengt Hallberg – the last of which brings sharper, more angular style to the music than some of Stan's accompanists on earlier American dates – pointing the way towards new experiments to come in his music! Hallberg really helps break the mold from other Getz Verve sessions of the period – and the relaxed, open-ended recording style of the date is almost an equal showcase for his talents as it is for Stan's! Titles include "Indiana", "Get Happy", "I Can't Believe That You're In Love With Me", "Everything Happens To Me", "Without A Song", and "I Don't Stand A Ghost Of A Chance With You".  © 1996-2022, Dusty Groove, Inc.
(MGM pressing, in nice shape! Cover has a trace of an old stamp on the front and back, and one slightly bumped corner.)

Lighthouse Sessions Vol 1
Vantage/Norma (Japan), 1953. Near Mint-
LP...$29.99
The first of two famous live recordings made by tenorist Stan Getz at the Lighthouse in California – with accompaniment from Bob Cooper on tenor, Jimmy Giuffre on baritone, Teddy Charles on vibes, and Russ Freeman on piano! LP, Vinyl record album