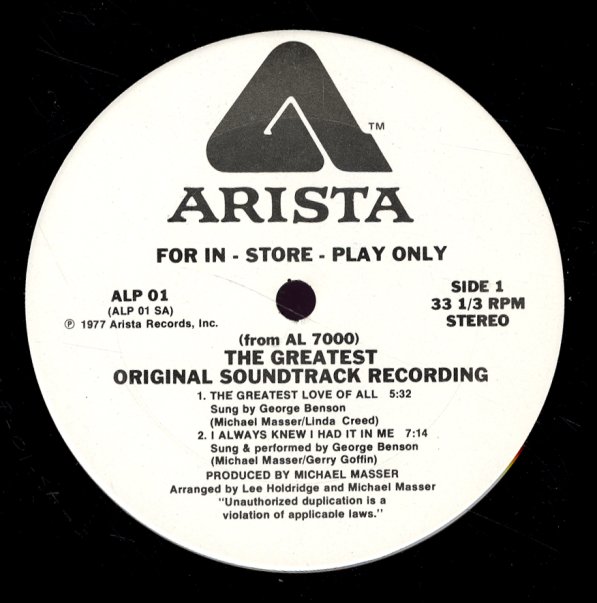 Rare promo-only 4-track e.p. of cuts (the best ones!) from the soundtrack to The Greatest, a 70s film about Muhammad Ali. The best cut is Mandrill's clubby "Ali Bombaye", an Afro-Funk tinged track with a strong uptempo groove, and lots of wah wah guitar. George Benson's "I Always Knew I Had It In Me" is also a pretty nice track, with a jazzy uptempo groove.  © 1996-2022, Dusty Groove, Inc.

Angie
Buddah/Arista, 1978. Near Mint- Gatefold
LP...$19.99
Angela Bofill's sublime first album – a mixture of jazzy soul and soulful jazz, all put together with a sound that's really a cut above most of her contemporaries! As with Jean Carn or Phyllis Hyman, there's a sophistication to Angela's sound here that indicates roots in much hipper ... LP, Vinyl record album

Somewhere In My Lifetime
Arista, 1978. Very Good
LP...$5.99
Warm and wonderful work from Phyllis Hyman – a set that's a lot more mainstream soul than her music of a few years before, but one that still shows a strong commitment to the more complicated styles of her roots! The sound here is full and proud – a nice extension of the work that ... LP, Vinyl record album

In The Night Time
Buddah/Arista, 1978. Very Good
LP...$4.99
Smooth mellow soul by Michael Henderson – taking up where he left off with his work with Norman Connors, and proving that he was an even better vocalist than bassist. The overall sound of this one's perhaps a bit slicker than his first 2 albums on Buddah – but there's still some strong ... LP, Vinyl record album

Raydio
Arista, 1978. Very Good+
LP...$6.99
The first Raydio set from guitarist Ray Parker – an artist who'd worked on countless session gigs by the time of this album, which gave him more than enough chops to get things right from the start! The sound is tight and definitely aimed at the charts, by Ray also brings his own sort of ... LP, Vinyl record album