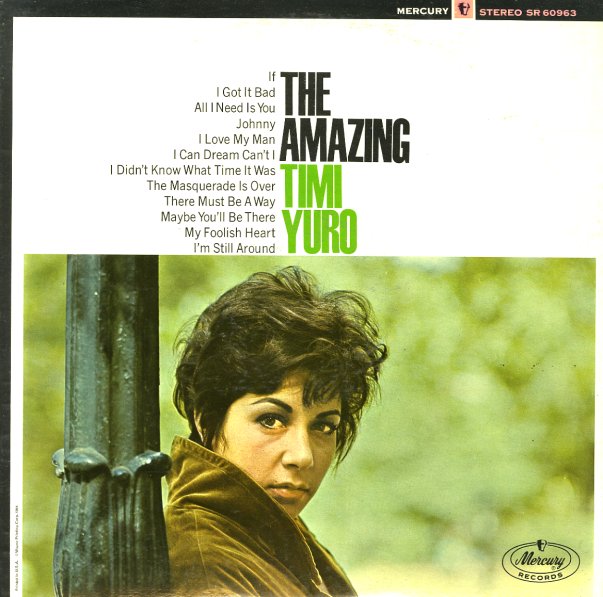 Amazing is right! Timi's one of the great under-rated Uptown Soul talents of the 60s, and this is one of her best records. The album features stunning production, in the best Mercury pop soul style of the 60s – with Quincy Jones at the controls, and Bobby Scott arranging and conducting. Timi's voice is soulful and fragile, with a sound that's a bit like Dinah Washington on her Mercury recordings, or like other uptown soul singers of the time. Titles include "I Love My Man", "Johnny", "If", "All I Need Is You", "I'm Still Around", and "There Must Be A Way".  © 1996-2021, Dusty Groove, Inc.
(Mono Mexican pressing . Cover has light wear.)

Heaven & Earth (test pressing)
Mercury, 1978. Very Good-
LP...$7.99
Excellent work from this smooth Chicago vocal group! The album may well be the best the group ever recorded – and it features some stellar ballad work produced with a nice spacey tone, almost in a Rose Royce mellow mode – by Jerry Butler's Fountain Productions team and by Clarence ... LP, Vinyl record album

Mr Mean
Mercury, 1977. Sealed Gatefold
LP...$14.99
A lesser-known 70s album by The Ohio Players – tunes recorded for the soundtrack of the late blacksploitation film Mr Mean, but also very much in the tight funk format of the group's Mercury work! Tracks are nice and long overall – almost in a stretched-out take on the soundtrack mode, ... LP, Vinyl record album

One & One
Mercury, 1970. Very Good+ Gatefold
LP...$6.99
A classic collaboration between 2 of the godfathers of Chicago soul – recorded at a time when both of them had emerged as proven big-sales artists, and were given the freedom to experiment in different styles with side projects like this. Here, they're singing in almost a Curtis Mayfield-esqu ... LP, Vinyl record album

Here's To You
Mercury, 1980. Very Good+
LP...$9.99
One of the most obscure – and best – albums by David Oliver, a smooth soul singer who recorded at the end of the 70s, with a warmly spiritual sound that had touches of Leon Ware, DJ Rogers, and other 70s smooth soul greats. This gem is produced by Wayne Henderson – who's really ... LP, Vinyl record album