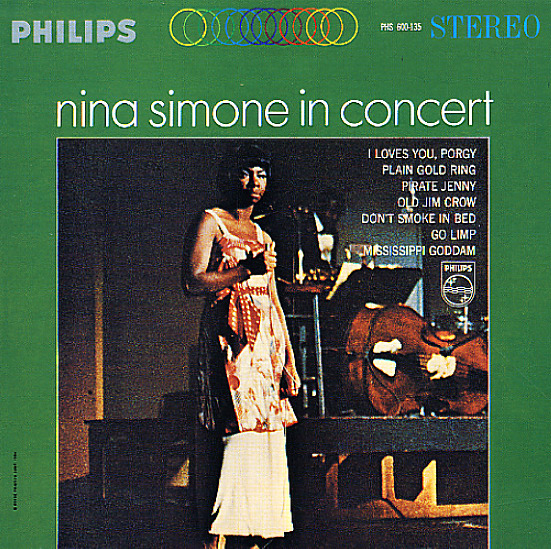 Classic Nina – recorded live on a variety of familiar numbers, but in that incredible mode that always transforms songs completely, lifting them from their roots and turning them into amazingly fierce proclamations of power and emotion! The tracks are longish, at a level that allows for a bit of improvisation that shows that Nina's spirit was always burning creatively – and the album includes a great version of Nina's classic "Mississippi Goddam", plus "Plain Gold Ring", "I Loves You, Porgy", "Don't Smoke In Bed", and "Go Limp".  © 1996-2021, Dusty Groove, Inc.
(Stereo pressing with deep groove. Cover has some wear, stains and aging.)

Folksy Nina
Colpix, 1964. Sealed
LP...$24.99
Nina's folsky, but she's also jazzy too – and the album's from a key time in which she was finding a very special way to bring the two modes together! Simone could have been a straight jazz singer if she wanted – but as records like this always remind us, she was always striving for ... LP, Vinyl record album

Amazing Nina Simone
Colpix, 1959. Near Mint-
LP...$16.99
Amazing is right – as Nina Simone is really taking off here – showing the world that she's way more than just another jazz singer – able to hit some righteous currents that would only explode even more in years to come! Nina's emotion is subtle, but extremely powerful – ... LP, Vinyl record album