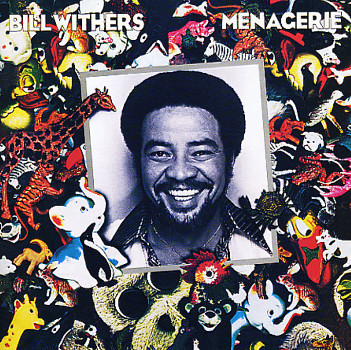 One of Bill Withers' greatest albums of the 70s – a set that has hip stepping off the acoustic sound of his Sussex records, into a warm and jazzy style that we like every bit as much as his earlier work! The album's got a wonderfully sophisticated jazzy vibe, and includes the excellent cut "Lovely Day" – a perfect midtempo track with some great electric keyboards behind Bill's raspy soulful voice, and a great hook on the chorus! Paul Riser handled a lot of the arrangements – and other titles include "Wintertime", "It Ain't Because Of Me Baby", "I Want To Spend The Night", and "Then You Smile At Me".  © 1996-2022, Dusty Groove, Inc.
(Original pressing. Cover has minmal wear.)

Watching You Watching Me
Columbia, 1985. Very Good+
LP...$5.99
A sweet little 80s session from Bill Withers – a lot less acoustic than his soul of the 70s, but in a way that works surprisingly well! As always with Bill, the vocals are the main thing, and the passage of time has done nothing to take off his edge – that warmly raspy quality that's ... LP, Vinyl record album