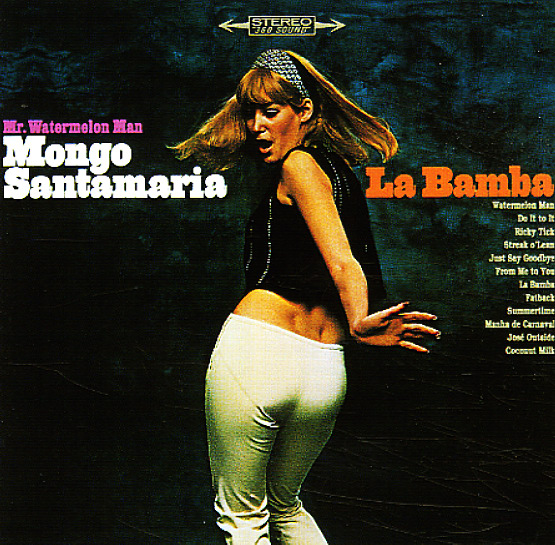 Mongo Santamaria at the height of his Latin Soul years – working on a cool Columbia session titled after an earlier hit, but served up with his new lean sound of the late 60s! The album's got that perfect Santamaria combo from the time – a group that features trumpet and these wonderfully sharp arrangements from the great Marty Sheller – plus very smoking reed work from a young Hubert Laws, wailing away on flute and tenor, and Bobby Capers on alto and baritone – both players who mix jazz and soul instrumental modes, to bring a hell of a lot of feeling to the overall sound of the band – in ways that really get past more familiar use of trumpet or trombone in other Latin combos. The band grooves nicely on original material like "Streak O Lean", "Ricky Tick", "Do It To It", "Fatback", "Coconut Milk", and "Jose Outside" – and they also reprise Mongo's big hit "Watermelon Man".  © 1996-2022, Dusty Groove, Inc.
(360 Sound stereo pressing. Cover has minimal wear.)

Mongo Explodes
Riverside, 1964. Near Mint-
LP...$24.99 29.99
A killer early album by Mongo Santamaria – almost an equal blend of jazz and Latin rhythms, and a great illustration of the unique contribution that he was making to both types of music back in the 60s! Mongo's group here is filled with some really great horn players – Nat Adderley on ... LP, Vinyl record album

Mongo's Way
Atlantic, 1971. Near Mint-
LP...$9.99
Sockin soul work from Mongo Santamaria – a real killer of an album, with a dope 70s sound! The album features Mongo hitting a nice blacksploitation mode – fuller arrangements than before, plus lots of electric touches on guitar, bass, and keyboards. Marty Sheller did most of the ... LP, Vinyl record album

Latin Joe – Dance To The Bossa Nova The Mambo The Cha Cha Cha
Columbia, 1962. Very Good+
LP...$18.99
Joe Quijano was one of the greatest all-around Latin bandleaders of the early 60s – and this rare session for Columbia shows him capably moving through a wide range of material, from mambo, to bossa, to cha cha cha! The bossa material is especially interesting – in that it's got more ... LP, Vinyl record album

Cuban Jazz (aka Sabor Cubano)
Gema, Early 60s. Very Good
LP...$39.99
Great Cuban grooves, with some heavy trumpet in the lead – as you'd guess from the sparkling cover of this vintage album! The set's got a nice raw feel throughout – and the strong use of lead trumpet almost gives some of the cuts the feel of Dizzy Gillespie's cubop experiments from the ... LP, Vinyl record album