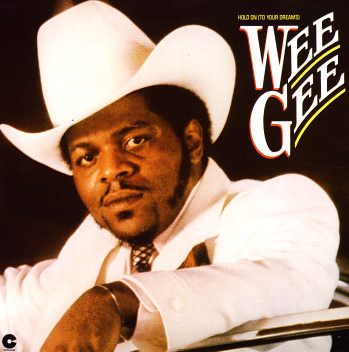 Hold On (To Your Dreams)

Great smooth soul from Wee Gee – a wonderful little record from the dawn of the 80s! The album's a great one, thanks largely to Vernon Bullock, who wrote, arranged, and produced with that uptempo modern style that he brought to his best work of the 70s. The soaring title track is a 10+ minute epic that really transcends – hitting an emotional groove early and holding it throughout – and the rest of the tunes are just as nice! Wee Gee's a pretty decent vocalist – and the lofty arrangements keep him in the groove in a mode that's similar to some of Lamont Dozier's best work. The keys and synthesizers are nice – never oversteeped in ways that mired modern soul later in the decade and they go very will with the larger arrangements! Titles include "Hold On (To Your Dreams)", "Let Me Lay With You", "You've Been A Part Of Me", "Remember The Love", and "Don't Make Me The Reason".  © 1996-2021, Dusty Groove, Inc.
(Cover has light wear.)

In The Purest Form
Cotillion, 1979. Near Mint-
LP...$14.99
Mass Production are definitely in their purest form here – stepping forward as one of the best soul acts in the Cotillion Records roster at the end of the 70s – and maybe one of the hippest modern funk ensembles of the time! These guys have a way of making things sound nice and lean, ... LP, Vinyl record album

Jimmy Castor Bunch
Cotillion, 1979. Near Mint-
LP...$9.99
Not one of Jimmy's strongest – kind of a batch of smooth tunes going for that bass-heavy early 80s approach to funk. Jimmy, as usual, plays a host of instruments and sings lead vocals – and he's got backup vocals on the album by The Chantels, who almost do a kind of Parlet kind of ... LP, Vinyl record album

Love Somebody Today
Cotillion, 1980. Sealed
LP...$9.99
A crisp, but funky set from Sister Sledge – produced by Nile Rodgers and Bernard Edwards of Chic, who also lead the studio band – tight funky soul grooves all the way! After the dizzying heights of We Are Family, there might have been nowhere to go but down commercially, but Love ... LP, Vinyl record album

Soul Searching
Atlantic, 1976. Near Mint-
LP...$16.99
Sublime mid 70s work from The Average White Band – and a record that really has the group deepening their groove a bit – moving past the heavier funk of their roots, into some mellower grooves that are totally great! There's a great undercurrent of jazz in some of the playing here ... LP, Vinyl record album

Cream City
Arista, 1977. Near Mint-
LP...$16.99
Sweet modern soul with a sound that would get picked up on years later by the LA G-Funk scene. The album's produced by War's Far Out production team – and it's got a smooth sound that's mixed with moogy keyboards and compressed instrumentation on the best cuts. Some tracks are a bit too ... LP, Vinyl record album