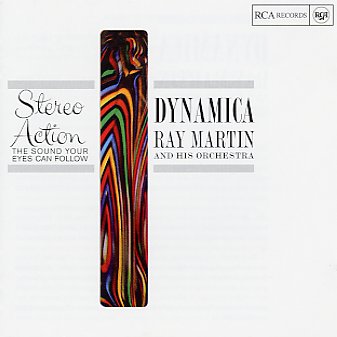 A sweet little Stereo Action set from Ray Martin, recorded with a very dynamic edge – hence the title! The feel here is a bit in the Esquivel mode – with orchestrations that swing all over the map, and use the stereo recording technology to their best advantage. And although Ray's perhaps a bit more sedate than Juan Garcia, lots of the tunes have some interesting instrumentation that keeps things interesting – sly little bits that sneak in under the radar, and crop up in the song to jazz things up a bit! Titles include "Mood Indigo", "Cry Me A River", "Bye Bye Blues", "Humoresque", "The Moon Was Yellow", and "Pagan Love Song".  © 1996-2021, Dusty Groove, Inc.
(Stereo Action pressing with deep groove in the die-cut slipcase cover. Includes the heavy inner sleeve. Cover has ring and edge wear and some discoloration from age.)