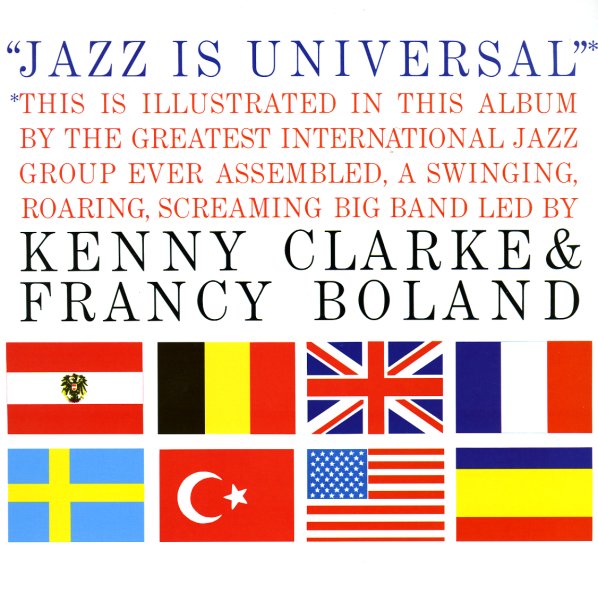 Great early genius from the Clarke Boland Big Band – proof that Kenny and Francy were onto something great, right from the start! The album really has the group hitting the heights of their MPS years – stretching out way past earlier big band modes, into the hip mix of rhythms and soulful solos that made the ensemble unlike any other group in the 60s – a really groundbreaking approach to their music, delivered by a range of top-shelf players! Arrangements are by Boland, who also plays piano – and other group members include Benny Bailey and Jimmy Deuchar on trumpets, Derek Humble on alto sax, Carl Drewo and Zoot Sims on tenor, Sahib Shihab on baritone sax and flute, and Ake Persson on trombone – plus rhythm from the rock-solid duo of Jimmy Woode on bass and Kenny Clarke on drums. Titles include the Latin-tinged "Los Bravos", and more great originals by Boland – including "Volutes", "The Styx", "Charon's Ferry", and "Box 703 Washington DC" – plus versions of "Gloria" and "Last Train From Overbrook".  © 1996-2022, Dusty Groove, Inc.
(Mono white label pressing with AT etch. Cover has light wear and aging, with some tears at the bottom of the back paste-on.)

All Smiles
MPS, 1968. Very Good+ Gatefold
LP...$19.99
A hard slammer from the Clarke-Boland Big Band – recorded when the band was burning up the road in Europe, taking great players and audiences in one fell swoop, coming up with some of the strongest straight jazz of their generation! The album features stunning solos all around by an all-star ... LP, Vinyl record album

Suddenly The Blues
Atlantic, 1962. Very Good+
LP...$34.99 (CD...$18.99)
A record of incredible beauty from the great Leo Wright – and one that we'd never part with at all! Wright's one of those excellent players from the 60s who never really gets his due – largely because he was always hiding behind larger groups, and because he left the US in the decade ... LP, Vinyl record album