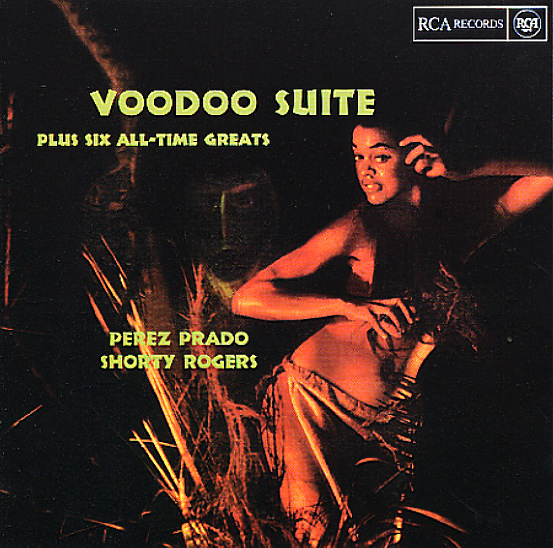 A great collaboration between Perez Prado and trumpeter Shorty Rogers – one in which Rogers' solos sparkle brilliantly over the top of Perez's tight Latin rhythms – all in a style that's as moody as it is evocative and rhythmic! Side one features the extended "Voodoo Suite" – a side-long track that builds nicely on rootsy Latin rhythms that are much freer than Prado's pop work of the 50s – and which features a growing jazz horizon at the edges, filled with players who include Bud Shank on alto and flute, Bob Cooper on tenor, Shelly Manne on drums, and Pete Candoli on trumpet – in a larger section underneath Shorty Rogers' solos. Side two features shorter tracks recorded a year later – a bit more in the standard Prado mode, but still with a really dynamic feel, and contributions from jazz players like Candoli and Rolf Erikson on trumpets, Willie Maiden on tenor, and Jay Hill on trombone. Titles include "Music Makers", "In The Mood", "St. James Infirmary", and "Jumpin At The Woodside".  © 1996-2020, Dusty Groove, Inc.
(Mono black label pressing with deep groove. Cover has light wear and aging, with a piece of red tape at the bottom of the spine.)