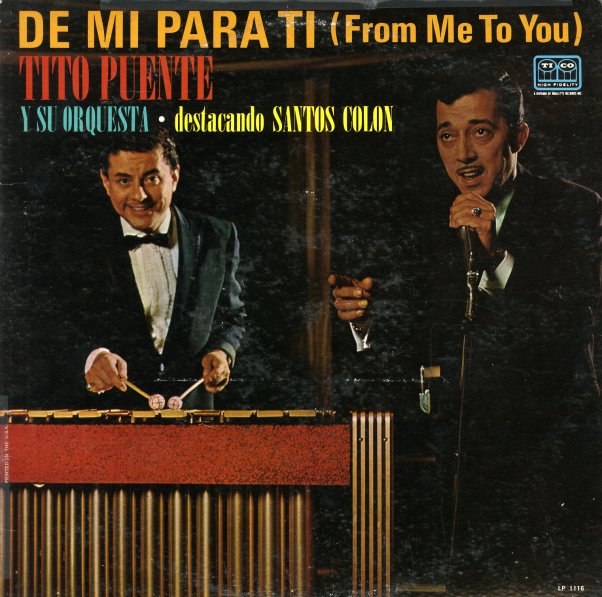 De Mi Para Ti (From Me To You)

The groovy 60s orchestra of Tito Puente gets some romantic vocals from the great Santos Colon – and the result is this classic Tico album that we hardly ever see on vinyl these days. Titles include "El Agitador", "Imagenes", "El Plato Roto", "Esperame", "Timbalito", and "Vete Pa'La Luna".  © 1996-2022, Dusty Groove, Inc.
(Mono orange label pressing. Vinyl has a number of marks and plays with some pops and crackle. Cover has light surface wear, edge wear, and some very faint stains and moisture damage.)

Puente In Love
Tico, Early 60s. Very Good+
LP...$19.99
We know, we know – sounds like a snoozer – but it's not! Sure, the record's titled "Tito In Love", which makes you feel that there's some lush romantic tracks of the sort you like to fall asleep to – but Tito actually breaks out the groove on a number of strong tracks, ... LP, Vinyl record album

Dance The Cha Cha Cha
Tico, Late 50s. Very Good
LP...$19.99
One of Tito's classic 50's recordings for Tico, all of which have a much rawer sound than his work for RCA from the same time. The tracks on here represent some Tito's best work in the Cha Cha Cha format – played with a hard sound and a good percussive drive aimed towards a very appreciative ... LP, Vinyl record album

Cuba Y Puerto Rico Son
Tico, 1966. Very Good+
LP...$38.99
The initial meeting of Tito Puente and Celia Cruz on record – the first of many great partnerships on wax, and a well-rounded set that has Cruz stepping out strongly in many modes! As the title implies, the styles are a range of Cuban and Puerto Rican musical themes – handled ... LP, Vinyl record album

Mambo Fantasy
Tico, Late 50s. Very Good-
LP...$19.99
One of Joe Loco's most haunting albums, and a moody mix of spare Latin percussion with haunting off-kilter piano solos, in a swirling blend of tracks that form Joe's Mambo Fantasy. Joe's work on the keys is as captivating as ever, and with the no-nonsense arrangements of the tracks, you can really ... LP, Vinyl record album

Our Heritage
Tico, 1976. Very Good
LP...$24.99
Flautist Lou Perez leads his band through the "Our Heritage" suite, plus a bunch of montunos and son tracks with a fairly traditional feel. The band includes Lou's flute, plus violins, Spanish guitar, cello, and piano. LP, Vinyl record album

Pete With A Latin Beat
Tico, 1960. Very Good+
LP...$49.99
Pete in a very Latin Beat – playing vibes with heavy percussion, in a style that has equal parts jazz and equal parts Latin, and which moves past the sleepier sound of some of his earlier, mellower records. Cha cha is the basic groove of the tunes, but the execution and the heavier style of ... LP, Vinyl record album