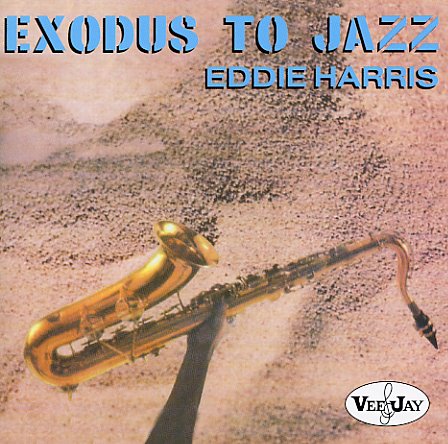 One of the true hit jazz albums of the 60s, and a record that's still pretty darn incredible today! Who'd have thought that a jazz recording of the theme to the film "Exodus" could have been such a hit? It was, and the way Eddie handled it forever transformed the face of jazz. Eddie was nicely poised between the harder soul jazz camps and the freer spiritual jazz underground that was operating in Chicago and Detroit in the 60s – and with his unique combo that had Joe Dorio on guitar, he transformed the song into a great groove that matched the other excellent material that he was laying down at the time. This record's a gem, which is often rare for such a jazz "hit" – and it includes loads of great tracks like "AM Blues", "Velocity", "Alicia", and "ATC".  © 1996-2022, Dusty Groove, Inc.
(Rainbow label stereo pressing with Audiomatrix stamp. Vinyl is double labeled on Side 1, and has some noisy residue on Side 2. Cover has a Stereo sticker on front, and some notes in pen and name in marker in back.)

Eddie Harris Goes To The Movies
Vee Jay, Early 60s. Near Mint-
LP...$11.99
Forget the title – which sounds like a bit of a gimmick – as this is a fine fine Eddie Harris album! After the success that Vee Jay had with Eddie Harris' huge hit version of "Exodus", they cut this album of Eddie playing movie themes – like "Green Dolphin ... LP, Vinyl record album

Walter Perkins' MJT+3
Vee Jay, 1959. Very Good
LP...$13.99
The MJT grooves like nobody's business, thanks to a core rhythm group that includes Harold Mabern on piano, Walter Perkins on drums, and Bob Cranshaw on bass. Add to the mix a young Frank Strozier on alto, fresh from Memphis (he made the trip to Chi-town with buddy Harold Mabern), and the smoking ... LP, Vinyl record album