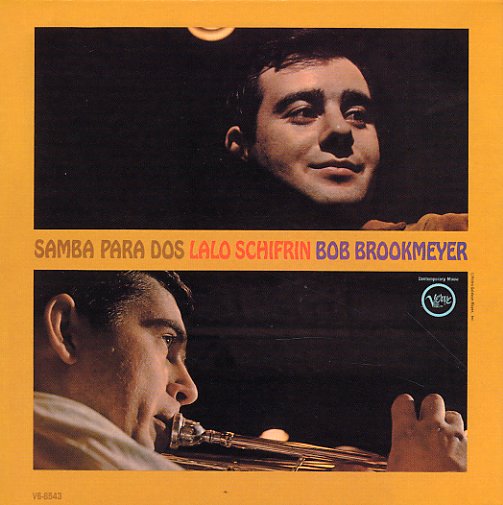 A great lost groover on Verve – recorded during the heyday of the label's bossa years with Stan Getz! The record features Bob Brookmeyer fronting a large group arranged and conducted by Lalo Schifrin – soloing over the top, while Lalo comes up with sparkling bossa-tinged grooves that are in the spirit of his best soundtrack work of the mid 60s. Brookmeyer's playing is great too – very different than his sparer, modernist work on other records – and very much in the tradition of Brazilian trombone players who were a key force in bossa jazz at the time. The set includes one long original, "Samba Para Dos", plus shorter standards like "My Funny Valentine", "What Kind Of Fool Am I", and "I Get A Kick Out Of You" – all taken in great jazzy bossa versions!  © 1996-2022, Dusty Groove, Inc.
(MGM stereo pressing. Cover has light wear and some pen inside the gatefold.)

Up With Donald Byrd (Japanese pressing)
Verve (Japan), 1964. Very Good
LP...$29.99
A great album, and unlike anything else Donald Byrd ever recorded – almost mad hodgepodge of the styles Byrd used at Blue Note, as the session brings together funky soul jazz with vocal backings – linking the groove of At The Races with the choral stylings of A New Perspective! The ... LP, Vinyl record album