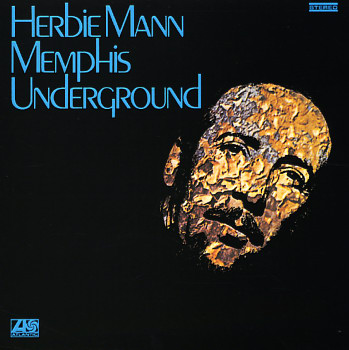 A sweet soulful set from Herbie Mann – one that has the jazz flautist taking on the 60s sound of Memphis! This album was such a big hit for Herbie that it's easy to forget the sheer raw power of the group – a mighty quartet that included Roy Ayers on vibes, and both Sonny Sharrock and Larry Coryell on guitars – jamming with a hard but ragged edge, and getting some tighter backing here by a hip Memphis soul rhythm section! The groove is great, with a heavier, funkier approach than Herbie was using on previous albums – and the tunes are all nice and long, with plenty of room for really great instrumental interplay! Titles include "Hold On, I'm Comin", "Chain Of Fools", and "Memphis Underground".  © 1996-2022, Dusty Groove, Inc.
(Broadway pressing. Cover has unglued seams, light wear, and a name in pen. Labels have a name in pen.)

Herbie Mann In Sweden (aka Mann In The Morning)
Prestige, 1957. Near Mint-
LP...$11.99 16.99
Different work than usual for Herbie – a series of sides recorded in Sweden in the late 50s, featuring Herbie on both flute and tenor! The feel here is at once more poised and more open than some of Herbie's US sides from the time – as the groups shift from track to track, and Herbie's ... LP, Vinyl record album

Herbie Mann At The Village Gate
Atlantic, 1962. Near Mint-
LP...$14.99 24.99
Herbie Mann's at the Village Gate – really wailing away in a set of extended numbers that not only set a whole new standard for live recording in jazz, but which also pushed forward the role of the flute in the music as well! There's a heck of a lot of soul in the grooves here – served ... LP, Vinyl record album