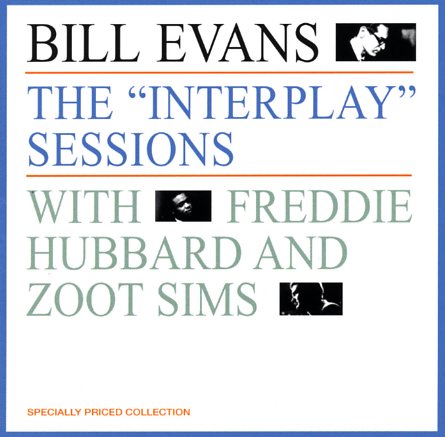 A real standout in the Bill Evans catalog for Riverside – and that's saying a lot, given how important all of his Riverside albums are! The core session's a rare quintet outing for Evans – one that breaks the mode of the usual trio format by adding in Freddie Hubbard on trumpet and Jim Hall on guitar – alongside rhythm players Percy Heath on bass and Philly Joe Jones on drums – already a unique enough match for Evans' talents. In a way, the record's one of those sessions that Riverside would sometimes do – pairing a key new voice as a leader with others in an all-star group – but in another way, it's also a return to the sound that first brought Evans' to a wider audience in the 1957 and 1958 years – when he was working in non-trio groups with more famous players – adding his unique piano stylings to their (then) better-known solo modes. The pairing of Evans and Hall has been beautifully documented on other records – and sounds equally great here – but the real treat is Freddie Hubbard's horn, which often lays back on most of the tracks, then bursts in with a brashness that really ignites some of the tunes! He's playing a bit muted here, trying to go for that Miles/Evans combination from the late 50s – but that's plenty ok with us, as we love those records a lot. Titles include "When You Wish Upon A Star", "You & The Night & The Music", "I'll Never Smile again", "You Go To My Head" and the Evans original, "Interplay". This double-length set also expands the original Interplay album with even more material from another group session in 1962 – a set recorded also with Philly Joe Jones on drums and Jim Hall on guitar – plus Ron Carter on bass and Zoot Sims on tenor. Titles include "Time Remembered", "Loose Bloose", "Fun Ride", "There Came You", "Fudgesickle Built For Four", and "My Bells".  © 1996-2021, Dusty Groove, Inc.
(Cover has a cut corner and discoloration from age.)