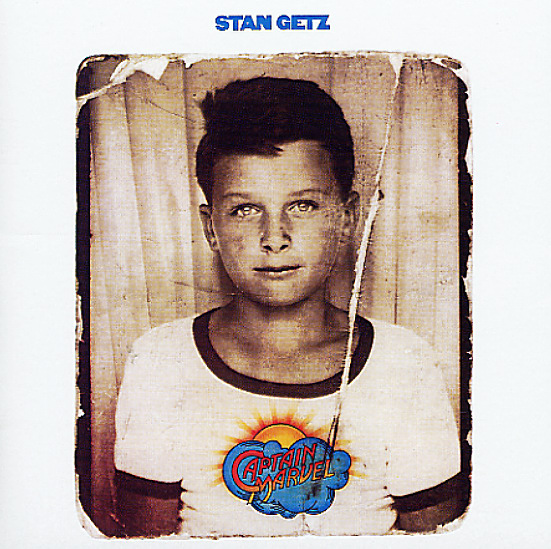 A wicked album that's one of Stan Getz's best from the 70s! The record features Stan reunited with Chick Corea, whose warm lyricism was the lynchpin in Getz's landmark Sweet Rain – the stunning session from 1968 that is perhaps our favorite-ever Getz album. Corea plays electric piano here, but with none of the indulgence that he was lapsing into at the time. His blocky chords stake out a stark new territory, into which Getz solos beautifully, into a range yet untapped at that time in his career. Tony Williams augments the group on drums, giving the whole thing a sense of freedom, but also a nice tight swing. Tracks include "La Fiesta", "Five Hundred Miles High", "Times Lie", and "Day Waves".  © 1996-2022, Dusty Groove, Inc.
(Original 70s pressing. Cover has light wear.)

Grand Stan
Joker (Japan), 1977. Near Mint-
LP...$33.99
A really obscure album from Stan Getz, and a great one too – a set of three very long tracks, played with a group that features Albert Dailey on piano, George Mraz on bass, and Billy Hart on drums! LP, Vinyl record album

Lighthouse Sessions Vol 1
Vantage/Norma (Japan), 1953. Near Mint-
LP...$29.99
The first of two famous live recordings made by tenorist Stan Getz at the Lighthouse in California – with accompaniment from Bob Cooper on tenor, Jimmy Giuffre on baritone, Teddy Charles on vibes, and Russ Freeman on piano! LP, Vinyl record album

Dolphin
Concord, 1981. Sealed
LP...$29.99 (CD...$9.99)
One of the best later moments from the great Stan Getz – a set we might even place on the same level as his 60s work for Verve – and certainly at the same par as his records in the 70s for Columbia! Yet this set is quite different than that latter batch – as it has Getz really ... LP, Vinyl record album

Focus
Verve, 1961. Very Good+ Gatefold
LP...$14.99 (CD...$4.99, CD...$4.99)
Oft-overlooked album that's actually one of Getz's most far-reaching of the 60s! Recorded in the year before he got caught up in his bossa pop frenzy, the record shows Getz as a darkly toned modernist, weaving out complex solos over the album's extended suite "Focus", written and ... LP, Vinyl record album

Stan Getz (Prestige – Early Singles/Stan Getz With Cal Tjader)
Prestige, 1949/1950/1958. Very Good+ 2LP Gatefold
LP...$11.99
A 2LP set that compiles early recordings made by Getz for Prestige – about half of them titles that were issued on early singles, combined with material from the album Stan Getz With Cal Tjader. The early singles feature a few tunes with the "brothers" style sound – Brew ... LP, Vinyl record album

Stan Getz with Cal Tjader
Fantasy, Late 50s. Near Mint-
LP...$14.99
A killer record from the late 50s – and one that hints at all the sides Stan would take in later years: his bossa sides, his vibes quartet with Gary Burton, and the playful lyricism of his recordings with Chick Corea. The set was recorded in San Francisco, when Stan had that great bassist ... LP, Vinyl record album