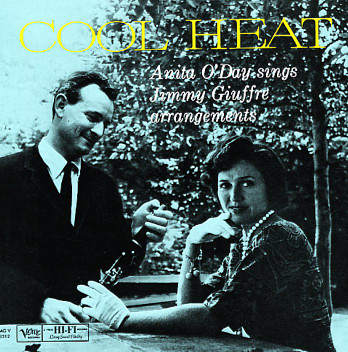 Very cool work from Anita O'Day – a session cut with Jimmy Giuffre arrangements, in a style that's a bit different than some of her other 50s work for Verve! Jimmy brings a nice touch of modernism to the record – casting the horns in ways that show his own love of creative colors and careful phrasing, which makes for a bit more sensitivity than you'd hear on some of her dates with Billy May. Anita really responds to this shift with her vocals – stepping around the tunes carefully, and seeming to slide in alongside Giuffre's horn charts in a really fresh way. The vibe's a bit like that of June Christy on Capitol with Pete Rugolo – which is a great recommendation to us – and titles include "Hershey Bar", "A Lover Is Blue", "Mack The Knife", "You're A Clown", and "Orphan Annie".  © 1996-2020, Dusty Groove, Inc.
(80s Japanese Polydor pressing, UMV 2679, with insert. Cover has a cutout notch, with an index label and clear tape on the spine.)