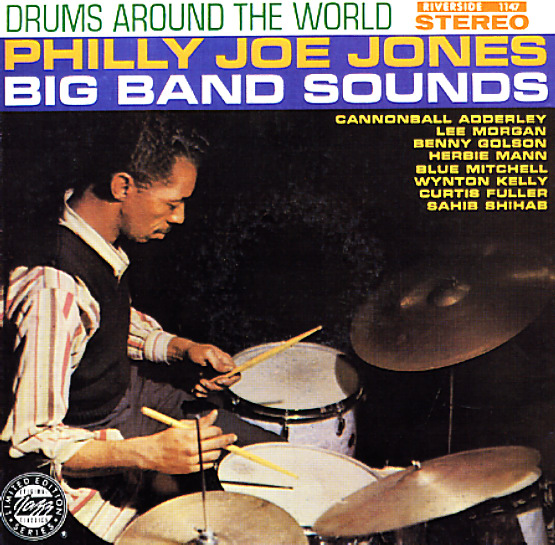 Drums Around The World

A wonderfully experimental album from drummer Philly Joe Jones – and one that has just the right sort of "ethnic" feel to earn its "Around The World" title! Mostly, the ethnicity comes through in exotic reed work by Sahib Shihab, Herbie Mann, and Cannonball Adderley – who all play wonderfully on the album – alongside straighter sidemen who include Lee Morgan and Blue Mitchell on trumpets, Benny Golson on tenor, and Curtis Fuller on trombone. There's a bit of the Yusef Lateef late 50s sound on here – mixed with Philly's killer crack sock drum approach – a blend that comes off wonderfully throughout, and really makes the album a standout in Philly Joe's catalog from the time. Titles include "Land Of The Blue Veils", "Blue Gwynn", "El Tambores", and "The Tribal Message", which is a nice drum solo!  © 1996-2021, Dusty Groove, Inc.
(Maroon label stereo Orpheum Productions pressing. Cover has some light wear and aging.)