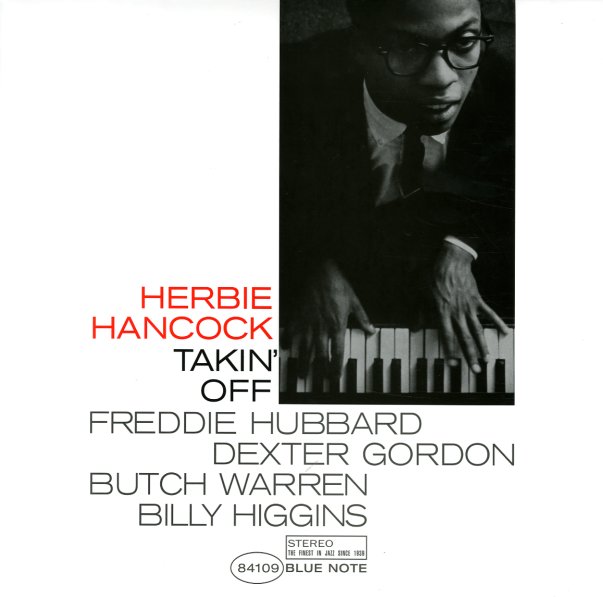 Herbie Hancock is certainly Takin Off at this point in his career – stepping into the limelight with an excellent batch of soul jazz tunes, including the first recording of his classic "Watermelon Man", the one track that probably put all his kids through school! Although that one went on to become a standard within a few short years in 60s jazz, it still sounds great here in the original – a very fresh take on the sound of soul jazz in the 60s – offered up here in a 7 minute version that has more sharp soloing than most other takes on the tune! The group here is great too – with Dexter Gordon on tenor, Freddie Hubbard on trumpet, Butch Warren on bass, and Billy Higgins on drums – and the tracks are all also originals by a young Herbie – including "Watermelon Man", "The Maze", "Driftin", "Three Bags Full", "Alone & I", and "Empty Pockets".  © 1996-2022, Dusty Groove, Inc.
(70s black b label pressing. Cover has light wear and a cut corner.)

Future Shock
Columbia, 1983. Near Mint-
LP...$13.99
The future is now! Or at least it seemed to be back in 1983 when Herbie teamed up with Bill Laswell to record this classic album of computer-driven keyboard grooves! Whatever you might think of the music, the record was a genius move for Herbie – who was kind of flopping around in a number ... LP, Vinyl record album

Head Hunters
Columbia, 1973. Very Good+
LP...$49.99 (CD...$3.99)
A seminal jazz funk session of the 70s – Herbie Hancock's legendary meeting with The Headhunters, and a killer batch of tunes that really gave the combo their name! Herbie's playing a wide range of keys here – including Fender Rhodes, clavinet, and Arp – but almost even better is ... LP, Vinyl record album