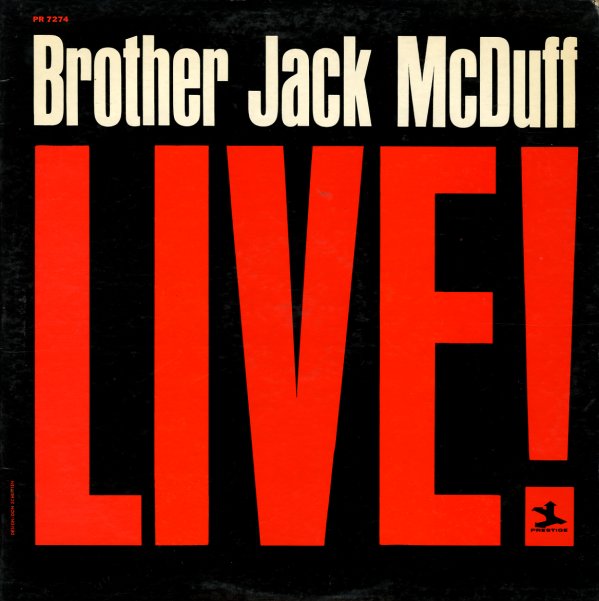 A killer, and one of three live sides McDuff cut for Prestige during the 60s – a monster session of stretched-out jazzy grooves, with many fine little dancers, and a raw soulful feel throughout! The group's one of Jack's best – as Red Holloway's tenor blows and hollers over the fingerpoppin' grooves delivered by a young George Benson on his first major guitar gig – and the soulful drums of Joe Dukes scatter across the place, taking the whole band into some incredible rhythms! Titles include cookin' live versions of "Rock Candy", "Sanctified Samba", "Undecided", and "A Real Goodun'".  © 1996-2020, Dusty Groove, Inc.
(Green label pressing. Cover has a split bottom seam.)

Soul Circle
Prestige, 1968. Near Mint-
LP...$29.99
An excellent album of long jazzy grooves by Brother Jack McDuff – and one that has him really breaking past the tighter style of early years, into the long complicated modal style that graced his best later work. The material was most likely recorded earlier than the record's 1968 release ... LP, Vinyl record album

4, 5 & 6
Prestige, 1956. Near Mint-
LP...$16.99
An unusual title, but one that refers to Jackie McLean in quartet, quintet, and sextet formation – a growing lineup that develops along the course of the record, as new players are added into the mix with a casual, almost blowing session approach! The set begins with Jackie's alto set out in ... LP, Vinyl record album