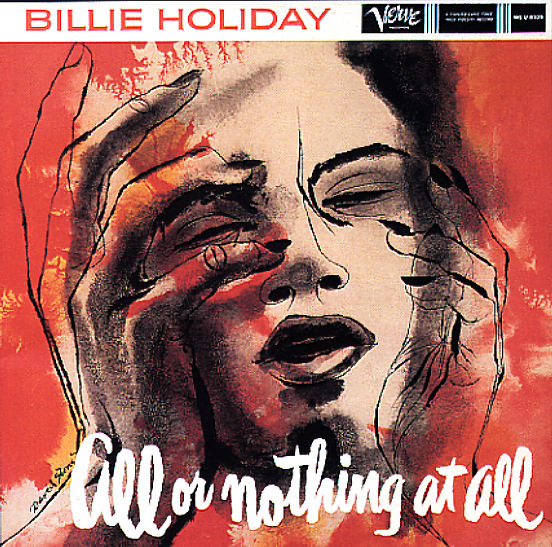 All Or Nothing At All

Beautiful Billie from the last years of her life. The material was recorded in 1956 and 1957 in Hollywood, featuring Barney Kessel, Ben Wesbster, Harry Edison, and Jimmy Rowles – all grooving nicely in small group formation. The tracks have a wonderfully fragile quality – and although standards, are still some of Billie's nicest work for Verve. Titles include "April In Paris", "All Or Nothing At All", "We'll Be Together Again", and "But Not For Me". Great David Stone Martin cover, too!  © 1996-2022, Dusty Groove, Inc.
(MGM stereo pressing. Cover has a split spine, adhesive residue on the seams, a cut corner, and some pen on the back.)

Close Enough For Love
Verve, 1989. Very Good+
LP...$19.99
Accompanied by Charles Ables on bass, Steve Williams on drums, and with some nice guest tenor work from Buck Hill! Titles include "Get Out Of Town", "Beautiful Friendship", "I Got Lost In His Arms", "Come Fly With Me", and "So I Love You". LP, Vinyl record album

Arthur Prysock & Count Basie
Verve, 1965. Near Mint-
LP...$7.99
An incredible pairing of two important 60s talents – magnificent vocals from Arthur Prysock, and some of the best backings he ever received – thanks to Basie! LP, Vinyl record album