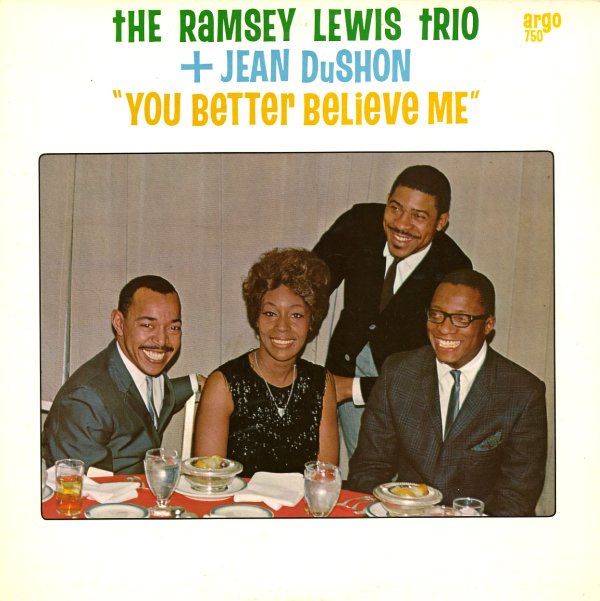 You Better Believe Me

A great set of soul jazz vocals from the Chicago scene – one of a few rare albums cut by singer Jean DuShon, who gets superb backing from the Ramsey Lewis trio! The group is great, and the style of the record allows for plenty of tight contributions from Eldee Young on bass and Red Holt on drums. The set's got a good assortment of lesser-known tracks, and very sensitive accompaniment – with titles that include "Goodbye Lover Hello Friend", "It Had Better Be Tonight", "You'd Better Believe Me", "Corcovado", and "Night Time".  © 1996-2021, Dusty Groove, Inc.
(Silver label Argo pressing. Cover has light wear, but is nice overall.)

Jazz Greats Of Our Time Vol 1
Coral, 1957. Very Good-
LP...$6.99
A great large group project from arranger Manny Albam – one that teams him up with "jazz greats" of the east coast scene, in a really hard-swinging set of tracks that showcase some wonderful solo work! Manny's working here with a set of players who are well-chosen for their ability ... LP, Vinyl record album

Shadow Of Your Smile
Verve, 1965. Very Good+
LP...$24.99
One of Astrud Gilberto's greatest albums – and quite possibly our personal favorite! The record features beautifully understated arrangements by Joao Donato, Don Sebesky, and Claus Ogerman – and the instrumentation is a haunting mix of bossa rhythms with darker orchestrations that ... LP, Vinyl record album

Herb Alpert Presents Sergio Mendes & Brasil '66
A&M, 1966. Very Good-
LP...$14.99
The start of a legend – and the very first album by Sergio Mendes' Brasil 66 group, proudly brought to the world through the godlike talents of a young Herb Alpert! Sergio was no stranger to the recording studio by the time of this set, but the record marked a real shift in his music – ... LP, Vinyl record album