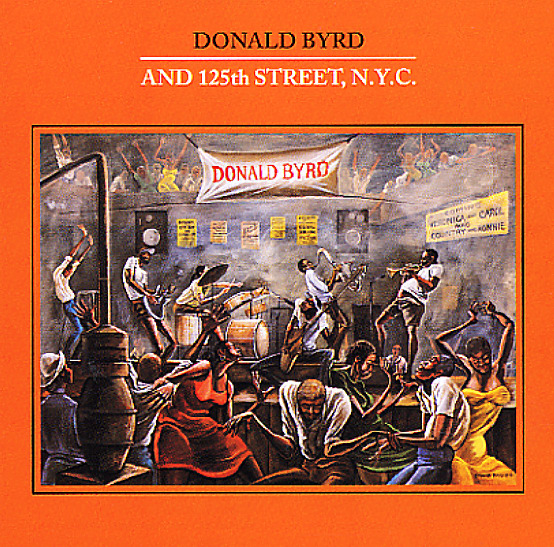 Smoking work from Donald Byrd – post-Blue Note, post-Larry Mizell, and with a modern funk groove that's still pretty darn tasty! Not one to rest on his laurels – which he could have easily done with endless Mizell-based recordings – Donald shifts his groove here towards more of a boogie-styled 80s approach – one that's got the same sort of loping funk that was showing up in the work of Tom Browne and some of the younger players on the scene at the time. There's a fuller, richer, more soul-based approach to the set – but still some strands of the Mizell years – especially in the album's great keyboard work by Clare Fischer, and its use of chorus vocals on a number of tracks. Wade Marcus and George Bohannon helped with arrangements – and titles include a great funky remake of Fischer's "Morning" – plus "Veronica", "Gold The Moon, White The Sun", "Marilyn", "Pretty Baby", and "People Suppose To Be Free".  © 1996-2023, Dusty Groove, Inc.
(White label promo. Cover has light wear and a promo stamp.)

Parisian Thoughfare – Byrd In Paris Vol 2
Brunswick (France), 1958. Near Mint-
LP...$39.99
The second volume of work that Donald Byrd recorded live at the Olympia in Paris in 1958 – and this set is even harder than the first! The set features Byrd playing with Doug Watkins, Walter Davis Jr, Art Taylor, and Bobby Jaspar – and the whole thing has the sound and style of some of ... LP, Vinyl record album

Thank You For FUML (Funkin Up My Life)
Elektra, 1978. Near Mint-
LP...$13.99
A post-Blue Note effort, and Donald's changing things up a bit with his 125th Street Orchestra and Uptown Singers – funking along in a way you'd expect from the longwinded title! Byrd loostens up the smoother backgrounds of his recent Larry Mizell helmed work, and in their place are grooves ... LP, Vinyl record album

Rit
Elektra, 1981. Very Good+
LP...$4.99
Few people did soulful fusion better than Lee Ritenour back in the early 80s – and the guitarist always seemed to find a way to really link together all the different sounds of the electric genre – from heavy jamming to soulful grooving to a rock-like appreciation for a good hook! ... LP, Vinyl record album

George Duke (1986)
Elektra, 1986. Near Mint-
LP...$4.99
A real move forward for the George Duke keyboard sound of the 80s – and a set that has George using a fair bit of synclavier and linn drums in the mix! Things are almost even more electric than before – and that's saying a lot for Duke – with almost no acoustic instrumentation at ... LP, Vinyl record album

Finesse (Nautilus Super Discs)
Elektra, 1981. Very Good+
LP...$6.99
A smooth set from reedman John Klemmer, but a pretty darn soulful one too – and a great illustration of the way that Klemmer could still hold onto his roots a lot more strongly than some of his contemporaries! The backings are gentle and fusiony – often with some great keyboard work ... LP, Vinyl record album

Spirit Within
Elektra, 1982. Near Mint-
LP...$4.99
Really beautiful work from the team of Red Rodney and Ira Sullivan – hardly the sort of stuff we might have heard from the players a decade or two before – and a sophisticated batch of tunes that has them stretching out in rich musical directions! There's little of the boppish roots of ... LP, Vinyl record album