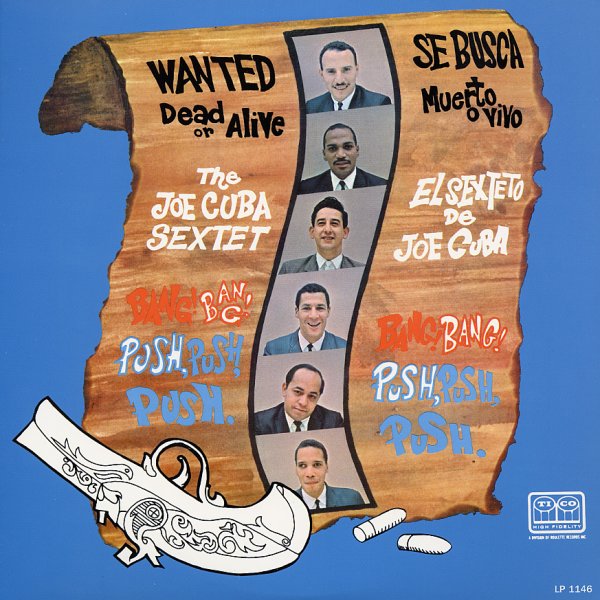 A Latin classic from the word "bang"! This album was the one that busted Joe Cuba out of the Latin ghetto – into the sound of 60s soul, early funk, and beyond. The record's a stone winner – filled with boogaloo tracks delivered by Joe's firey young sextet, a killer ensemble that was setting the Latin world on its ear at the time. The title track – "Bang Bang" – is one of those tracks that you'll recognize from a million references, but which never sounds as good as it does on this impeccable version from Joe. The whole album follows in a similar suit – blending Latin, jazz, and soul with effortless ease – shifting between English and Spanish lyrics in a genre-busting style that really captures all the freshness of the era. The whole thing's great, and titles include "Asi Soy", "Alafia", "Triste", "Mujer Divina", "Oh Yeah", "Sock It To Me", and the "Bang Bang" follow-up, "Push, Push, Push". Great, hard, and a heck of a lot of fun!  © 1996-2023, Dusty Groove, Inc.
(Original mono 60s pressing! Cover has some staining & flaking on the bottom corner, and a spot of edge wear, but is nice otherwise! Includes Tico inner sleeve.)

Cole Porter In Latin America
Tico, Early 60s. Very Good
LP...$6.99
Pete Terrace adds some great Latin touches to the work of Cole Porter – giving some of the tunes a jazzy mambo swing, and others a nice cha cha groove! Tracks include "Begin The Beguine", "I Concentrate On You", "Just One Of Those Things", "In The Still Of ... LP, Vinyl record album

Senor Tito Rodriguez
Tico, 1958. Near Mint-
LP...$11.99 16.99
An excellent little set from Tito – recorded in the late 50s for Tico, with a groove that's harder than much of his 60s work for United Artists! The lineup includes some nice jazzy vibes work on a few tracks – and the album includes the great percussive track "Suena Tu Bongo (Beat ... LP, Vinyl record album