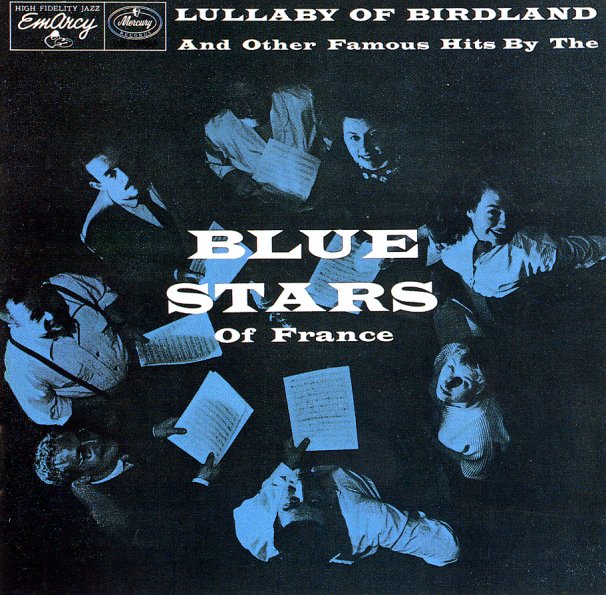 A key link in the early career of Blossom Dearie – and a fab album of jazzy vocal tracks throughout! Before Blossom recorded some of her 50s sides for Verve in the US, she was living in France and working with The Blue Stars – a cool male/female jazz vocal group that went onto become the prototype for later acts like The Swingle Singers, Lambert Hendricks & Ross, and Les Double Six! This 1954 album by the group was actually a minor hit in the US, where their swinging harmony version of "Lullaby Of Birdland" crept up the charts for a few weeks. The album's even cooler than the hit, though, and has lots of groovy jazz vocal tracks in French, with the sort of vocalese harmony scatting that you probably already know from the more famous groups mentioned above. You can always pick out Blossom's distinctive voice in the group, but the real strength is the groovy group vocals – shining beautifully in one of the first great recordings of vocalese harmony! Tracks include "Gina", "Embrasse Moi Bien", "La Danse Du Baiser", "Toute Ma Joie", and a version of "Mister Sandman" that's been renamed "Mister L'Amour".  © 1996-2021, Dusty Groove, Inc.
(Blue label EmArcy pressing with deep groove. Cover has heavy oxidation on front and some very light stain along the spine on back.)

In The Land Of Hi Fi
EmArcy, Mid 50s. Very Good+
LP...$4.99
The Hi Fi in the title might imply that there's a bit more going on here arrangement-wise than on some of Dinah's other albums – but the scoring by Hal Mooney is still pretty straight, in a sophisticated jazzy mode that works best with the vocals, and which never overwhelms the singing for ... LP, Vinyl record album