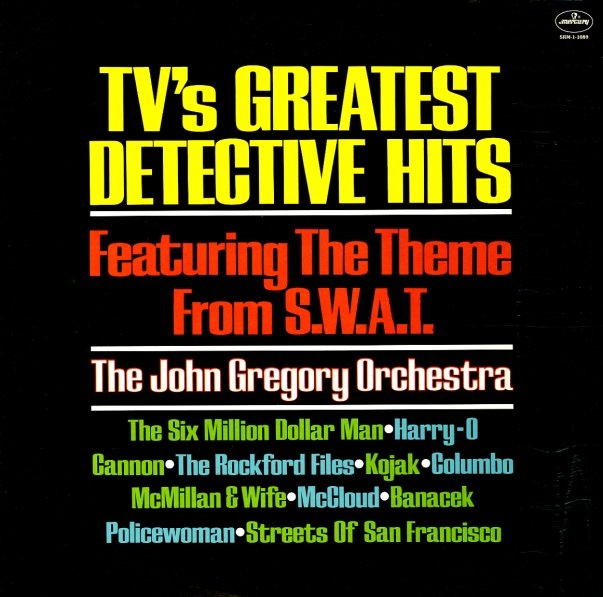 Excellent work from Brit easy bandleader John Gregory – an assortment of 70s police and crime themes, played by a big band with a nice soundtrack-y finish! Nearly all the tunes are uptempo, and the feel of the record is very much in the same vein as Henry Mancini's Cop Show Themes album – although perhaps with a bit less electronics. Titles include "Theme From SWAT", "Harry O", "Streets Of San Francisco", "Cannon", "Rockford Files", "Kojak", "McCloud", "Police Woman", and "Six-Million Dollar Man".  © 1996-2022, Dusty Groove, Inc.
(Cover has a promo stamp, light wear.)

Harry Revel's Music From Out Of Space
MGM, Mid 50s. Very Good+
LP...$39.99
Beautiful record, beautiful cover, and a fantastic bit of space age bachelor pad listening. The arrangements have a bit more of a romantic twist than the usual stuff from this era, but they're in keeping with Revel's classic Music Out Of the Moon and Music For Peace Of Mind. The arrangments here ... LP, Vinyl record album

Brian's Song
Bell, 1972. Near Mint-
LP...$6.99
A wonderful little record from Michel Legrand – one of his best non-soundtrack albums of the time! The album is titled after the theme to the soppy film Brian's Song – but it's got a lot more to offer than that – and has Legrand performing versions of soundtrack numbers from a ... LP, Vinyl record album