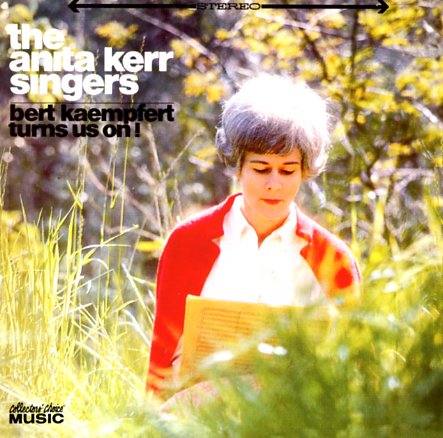 Bert Kaempfert Turns Us On

Hard to imagine Anita Kerr being turned on – especially given her school marm-ish look on the cover – but the album's a pretty darn groovy set, and one that certainly shows Kerr picking up some of the best easy elements of the 60s! The Burt Kaempfert touch is heard here especially in the album's use of electric bass – a nicely bouncing element that gives most of the tunes a lot more of a bottom than some of Kerr's other work – used in that trademark stepping style that Burt first laid down himself a few years before on worldwide instrumental hits, and made even better here by Anita's great quartet and their warmly-crafted vocal harmonies! Titles include many tunes presented in a Kaempfert-styled way – but with vocals – and tracks include "Love", "I Can't Help Remembering You", "Two Can Live On Love Alone", 'Spanish Eyes", "Remember When", "Danke Schoen", "Strangers In The Night", "Wonderland By Night", and "A Swingin' Safari".  © 1996-2020, Dusty Groove, Inc.
(Gold label stereo pressing.)

Moonlight & Shadows
Dot, 1957. Very Good+
LP...$3.99
Dreamy vocal work from Bonnie Guitar – a singer with a bit of a country tinge, but a jazzy feel as well! The album's got a laidback and mellow feel that fits perfectly with the title – moonlight, with just a hint of shadow – a blue undercurrent that comes from Bonnie's nice deep-t ... LP, Vinyl record album